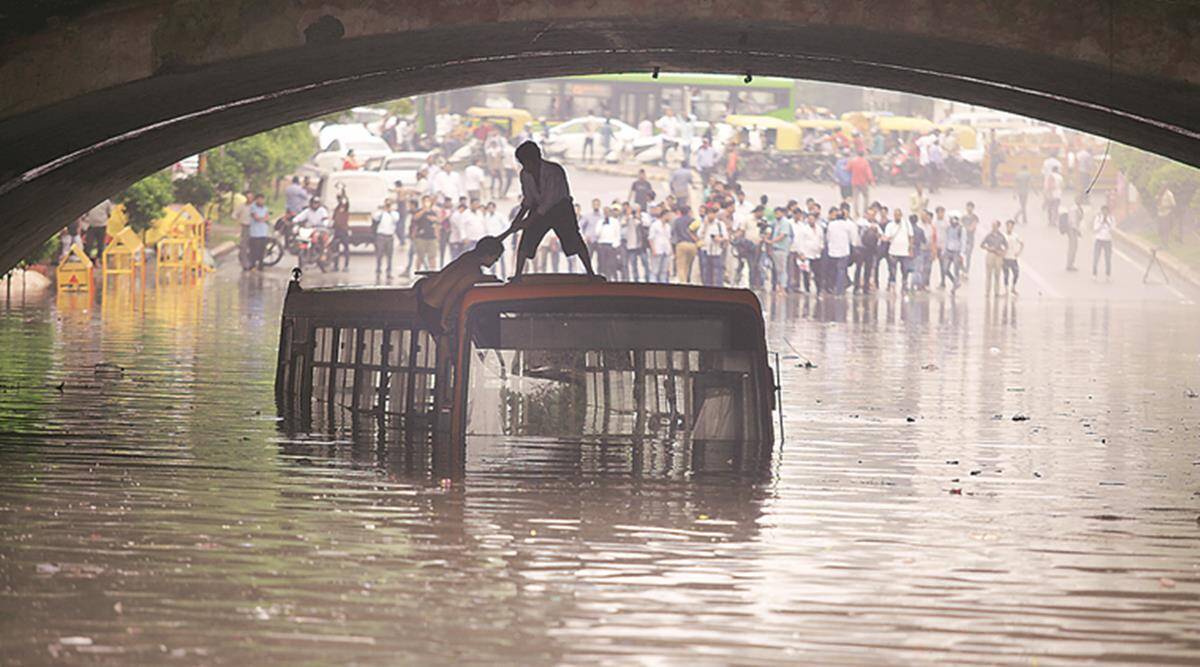 The entire NCR including the National capital Delhi is flooded by water because of heavy rain on Saturday morning. Since late-night, it has been raining unceasingly and this is causing problems for the common people in the morning. Due to heavy rains in many areas of the capital, the roads were waterlogged.

Delhi Police has closed this road for commuting after one and a half feet of water has accumulated on the roads in the Azad Nagar underpass. A similar situation is also in ITO. The police have also banned the movement of traffic near Minto Bridge. Apart from this, traffic has also been affected due to waterlogging on the roads near Moolchand Underpass. Apart from this several roads near ITP, Pragati Maidan, Vinod Nagar, Lajpat Nagar, etc, were also waterlogged.

According to the information, due to the waterlogging caused by the rain, the roads have been flooded with water to knee length. In such a situation, the vehicles are not moving, they are crawling. Due to this, the roads have also been blocked in many places.

Delhi Government action on water logging due to rain

Delhi urban development minister Satyendra Jain ordered the Public Works Department (PWD) and the flood and irrigation departments officials to take necessary steps on waterlogging. He said that “The officials should work fast, whether you have to do maintenance, or if there is need to build new drains, do it. We don’t want the people of Delhi to face any kind of problem due to waterlogging.”

Delhi urban development minister Jain said that “The officials need to stay alert and active. If there is any complaint regarding water logging coming from any part of Delhi, they have to respond to them quickly. The ministry has held meetings throughout the monsoon season with concerned department officials to solve the problem of waterlogging. Last month also one meeting was held where the minister Satyendra Jain ordered officials to use pumps and refurbish roads quickly in those areas where damage has been caused due to waterlogging.”

Along with this PWD has issued a helpline number 011-23490323 and 1800-11-0093 for those people who are facing water logging issues in their areas. They had also established a monsoon control room where anyone can file waterlogging complaints.

Officials of PWD said that "the Control room will work 24 hours. Along with the helpline numbers people can also complain at [email protected] or WhatsApp it on 8130188222. The Control room office is on the 12th floor of its headquarters near the ITO"

The PWD has installed CCTV cameras at vulnerable points so that they can monitor the conditions of roads during monsoon season.

IMD had also said that till August 23 there will be moderate rainfall and thunderstorms in Delhi.

The IMD uses four colour codes: green, yellow, orange, and red. The green alert means everything is well and good, the yellow alert means that the weather is going to be bad or could change for the worse, orange alert indicates the warning for extremely bad weather with road and drain closures and it can also interrupt the power supply. Red alert is for extremely bad weather conditions, in which the lives of people are in danger.

Delhi-NCR people got relief from the heat

The weather has become pleasant due to rain and a drop in temperature has also been felt. People have got relief from the heat. It rained in Delhi on Friday morning as well. The weather had become pleasant then. Simultaneously, cold winds were blowing. It rained in many areas including Delhi's India Gate and Feroz Shah Road. Earlier on Tuesday, the minimum temperature in Delhi was recorded at 30 degrees Celsius. According to the India Meteorological Department (IMD), the relative humidity was recorded at 82 percent in the morning. The IMD had predicted rain from August 18.

Before this Delhi last received rain on August 8 in which the recording was 15.4 mm rainfall. IMD officials said that from August 9, the monsoon was in the break phase till 19 August. Since 2017 this was the longest monsoon pause. Apart from this, July received 507.1 mm rainfall, but August has received only 74.2 mm rainfall.

According to the Skymet Weather report, in the next 24 hours light rain may occur over Delhi, Punjab, Haryana, Gujarat, Rajasthan, Bihar, Uttar Pradesh, Jharkhand, West Bengal, Odisha, Maharashtra, Uttarakhand, parts of Himachal Pradesh. There is also a possibility of light rain in Jammu and Kashmir and Ladakh. If we talk about the states of the south and regions in Tamil Nadu and Puducherry will experience rain from today onwards. Kerala, Mahe, and Andhra Pradesh will also witness heavy rain on Saturday.