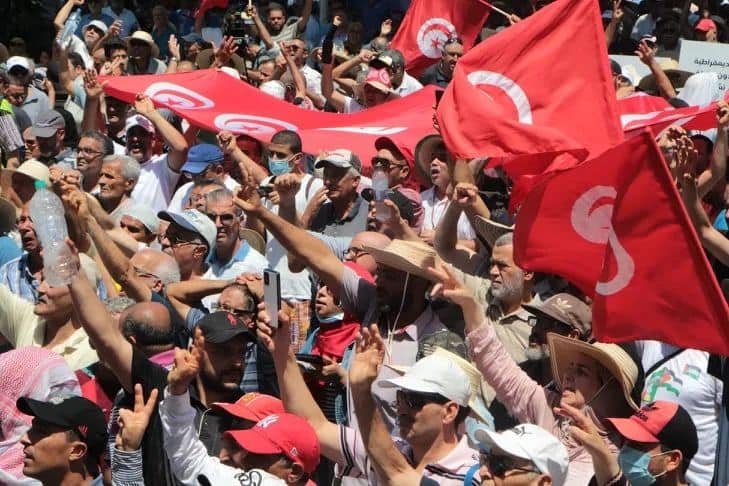 Protests broke out in the capital of Tunisia against President Kais Saied's plans for political reforms, as he plans to draft a new constitution and “ cleanse the judiciary” from what he calls “rampant corruption”.

On June 19, Thousands marched toward Habib Bourguiba Avenue in a major demonstration against Kais Saied. Protesters waved Tunisian flags and chanted slogans against the president as “Kais, you coward, Tunisian people are not insulted”, “ No dialogue with the president” and “ we are loyal to the blood of the martyrs”

The protest was called by opposition parties, such as the Ennahda Islamist party to disavow Saied’s policy, like the dismissal of 57 judges and waves of trials for some well-known politicians.

A large number of protesters gathered in the centre of Tunis as a rejection against Kais Saied’s calls for a new referendum, just a day after a mass rally, called by the Free Constitutional Party, leader Abir Moussi.  as opposition to Saied’s new plan after seizing

the executive authority last year, dissolving parliament and starting to rule by decree in a move that opponents described as a “coup”.

Tunisian Judges voted unanimously to extend their national strike for the third week as a repudiation of Kais Saied’s “continuing attempts to interfere with the judiciary decisions”, according to Mourad Massoudi, the head of the Young Judges Association. The judges have also decided to go on hunger strike as an escalation move against Saied.

Sadok Belaid, the head of Tunisia's constitution committee said on Saturday he would uncover the new draft of the constitution to the public on 20 Monday this week. Belaid gives an insight into his new draft saying that it would omit any Islamic references.

On the other hand, president Kais Saied's supporters expressed their approval of their president’s political decisions. According to them, Saied is standing up against elite forces and their corruption. They claim former political figures have eroded Tunisia to a decade of political and economic ruin.

A New Constitution Without Any Islamic References

Tunisia’s UGTT Strike Against The Referendum: What’s Next?

Is It The Beginning of A Democracy Or The Emergence Of A Tyranny?