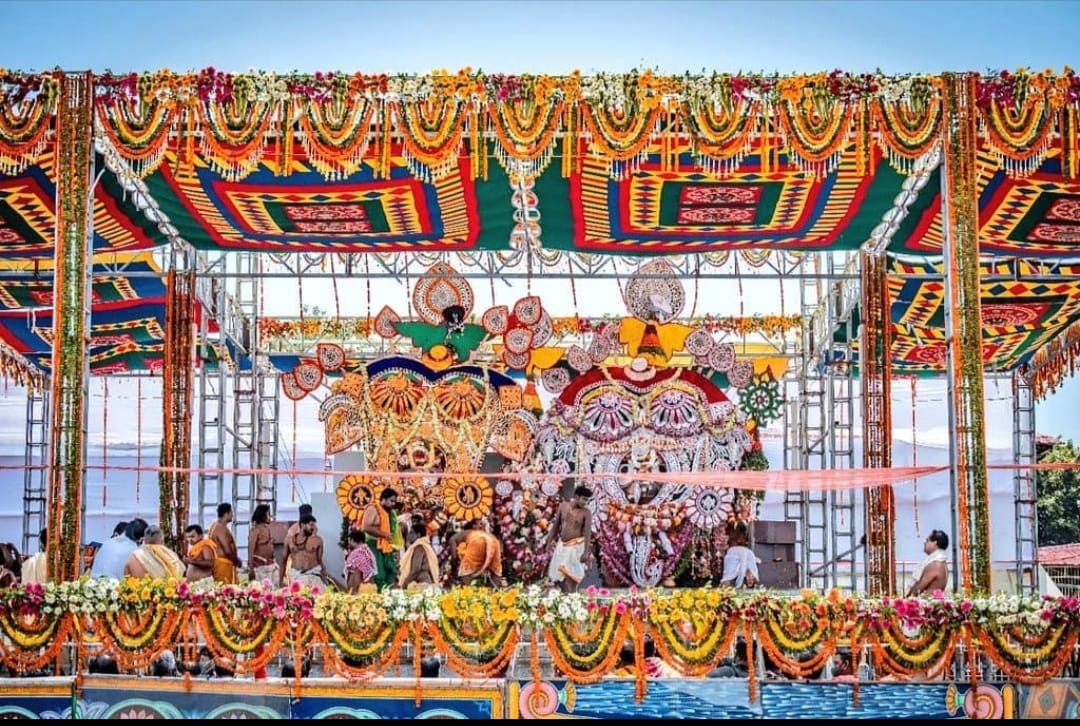 Snana Yatra, the grand annual bathing festival of the presiding deities of the world-famous Jagannath temple at Puri was held on the 24th of Jun, Thursday this year. Though the thousand-year festival is usually celebrated with great pomp and participation of a huge crowd of devotees from the world over, this year it was done amid strict restrictions and much-muted fanfare. In the wake of the ongoing Covid pandemic firm SOPs and precautionary protocols were put into place. 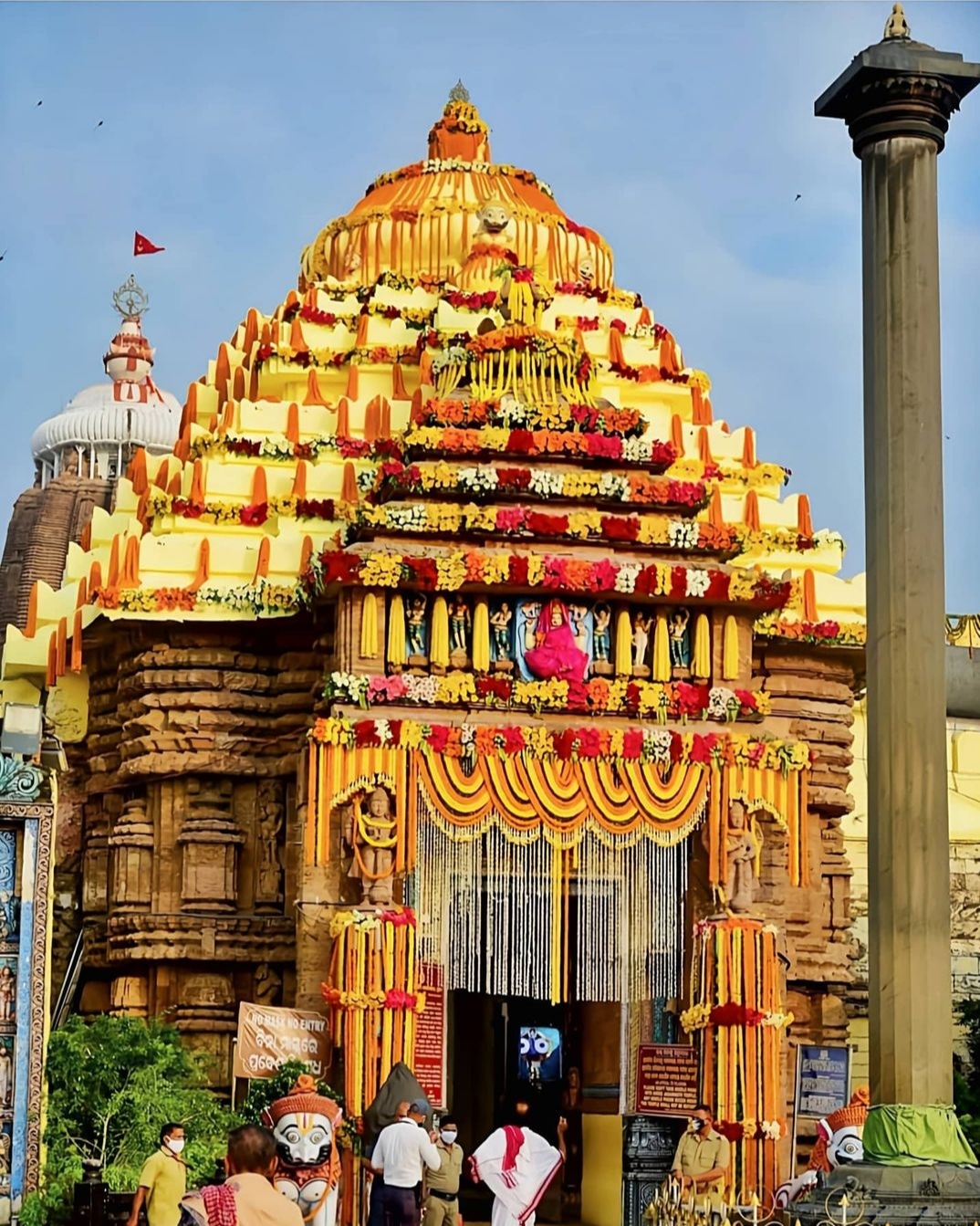 Deva Snana Purnima or Snana Yatra is the annual divine bathing ritual of the sibling trio Lord Jagannath, Balabhadra, Subhadra, the reigning deities of Srimandir in the temple city of Puri of the eastern coastal state of Odisha. It is also the auspicious birthday of Jagannath and notably the start of the preparations for the famed Rath Yatra of Srikshetra Dham.

Snana Jatra is celebrated each year on the Purnima (full moon day) of the Hindu calendar month of Jyeshtha. On this day the deities Jagannath, Balabhadra, Subhadra, Sudarshana, and Madanmohana are brought out from the Garbhagriha (sanctum sanctorum) and taken in a grand procession called ‘Pahandi’ to the Snana Bedi (the bathing platform in the temple premises).

There they are ceremonially bathed and decorated for a public audience with the devotees. The bathing platform overlooks the ‘Bada Danda’, the grand road where lakhs of devotees congregate to have a darshan of their beloved God.

During the main ceremony of the day, the deities are bathed with 108 pots of ritually purified water drawn from the northern well called ‘suna kua’ in the temple complex. This ceremonial bath is carried out to the accompaniment of feverous religious incantations. In the evening, after the bathing ritual, Jagannath and Balabhadra are decked up in the elephant headgear representing the God Ganesh. This form of God is called the 'Gajavesha' or the elephant attire. 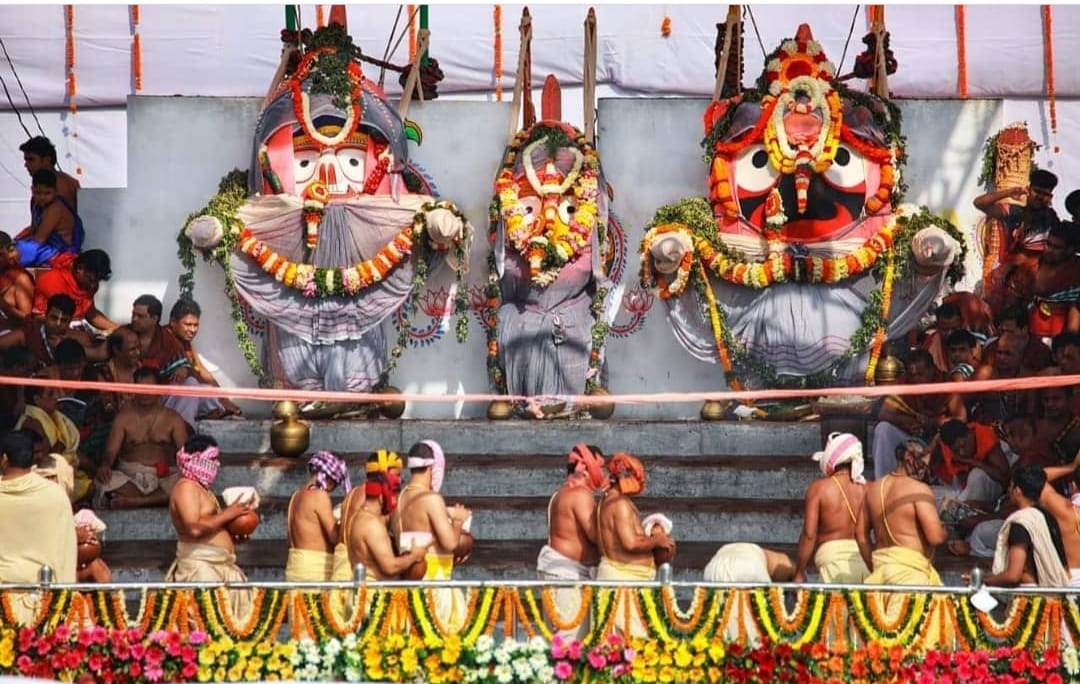 The Sibling deities are regarded in Odisha as living Gods and perform their daily duties like their thousands of devotees. It is believed that during this time of precipice between the ending of summer and the beginning of monsoon the atmosphere is too sultry and uncomfortable. So for physical comfort and cooling the deities undergo a grand bathing ritual.

It is also believed that being the divine lords of Odisha, this divine bathing ritual usher in coolness in the atmosphere and brings in the rain. This ritual is also a preparation of the deities before their annual Rath Yatra slated a few days later.

Interestingly the deities are traditionally believed to fall ill after heavy bathing and are kept in a sick room to recuperate in privacy. The temple remains closed and the Gods cannot be seen by the devotees during this period called ‘Anasara’ or resting. The atmosphere becomes very hot and humid as if reflecting the God’s illness.

After almost 15 days of resting and recovering, the Gods reappear to give darshan in a ritual called ‘Naba Yauvanotsava’ on the eve of their annual sojourn called Rath Yatra. This period coincides with the start of proper monsoon rains.

This year all the rituals were diligently performed on time. The schedule by the Shri Jagannath Temple Administration (SJTA) was religiously followed. Mangalaparna started at 1 am, followed by Pahandi (the walking procession of the deities to the Snana mandap) till 4 am and thereafter the Snana bidhi (bathing ritual) was performed. The deities were bathed with the 108 pitchers of water drawn from the northern well.

The Chhera Pahanra (sweeping of the bathing place) ritual by Gajapati Maharaj, the king of Puri, was held at 10:30 am. The trinity was thereafter adorned with the Gajanana Besha or Hati Besha (elephant attire) from 11:00 am and the daily food offering or ‘Bhogalagi’ was performed in full public view. 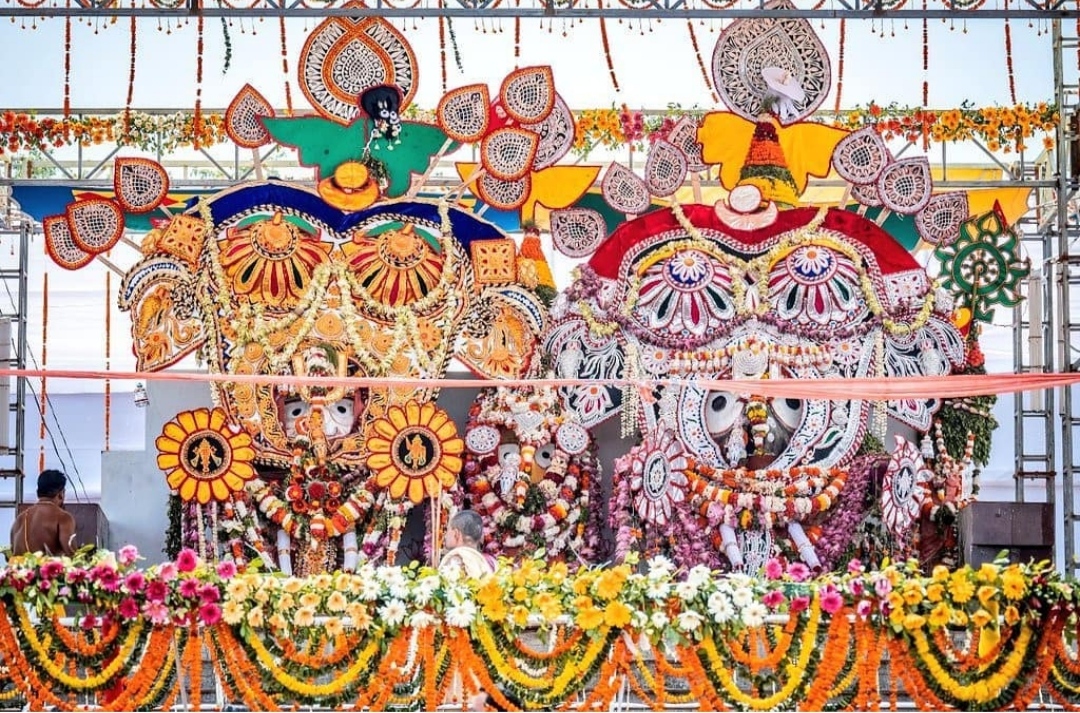 Lord Balabhadra, Devi Subhadra, and Lord Jagannath were then taken to the Anasara Ghar (sick room) as it is believed that they fell ill after taking the bath.

The Bahuda Pahandi (the return procession) of the deities from the bathing pandal to the sick room inside the temple took place between 5 pm-8 pm. The Anasara (sick) rituals have begun from that day and will continue for the next 15 days.

A departure from the customary routine –

Each year the festival is physically attended by thousands of devotees who descend on the temple town of Puri from around the world.  But this year, breaking away from the age-old tradition, no crowd was allowed keeping the pandemic situation in mind.

The District Magistrate-cum-Collector of Puri, Mr. Samarth Verma said, the state government had made elaborate arrangements for the live telecast of Jagannath Snana Yatra this year. "Once in a year, God comes outside so that people of other religions can get `darshan`, so lakhs of people gather every year outside the temple. This year, however, the thousand-year ritual was witnessed virtually," Varma told ANI. He also added that those who took part in the rituals at the Jagannath Temple had tested negative for COVID-19, while the priests present were fully vaccinated.

Unlike each year, even the Chhera Pahanra ritual was performed by Mudirastha (the king’s representative who executes rituals on his behalf), as Sri Dibyasingh Deb, the king of Puri, skipped the ritual because of the pandemic. 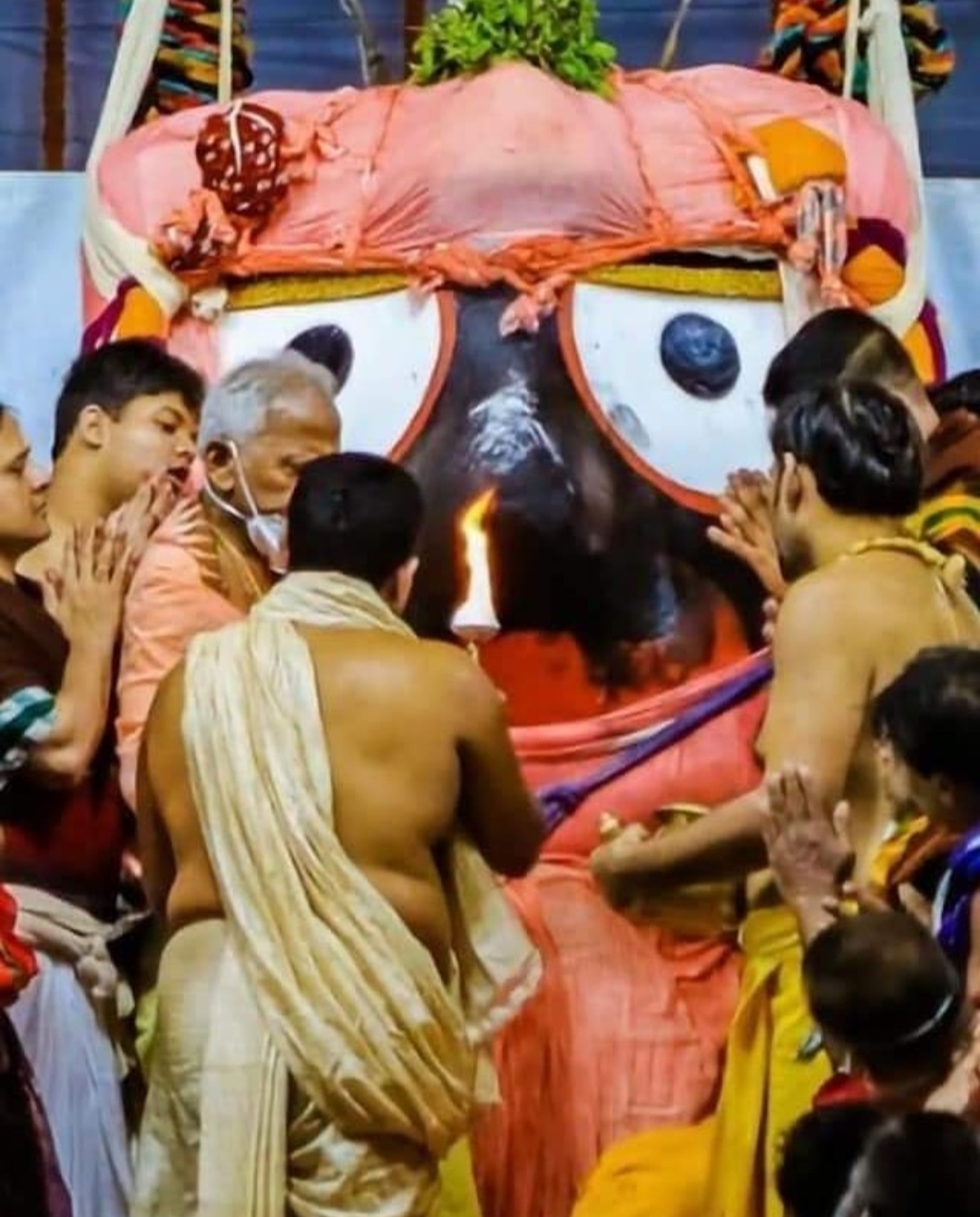 Reiterating what the DM said, Chief administrator of the temple Dr. Krishan Kumar informed that the festival was live-streamed for devotees across the world. "There was no gathering outside the temple as Section 144 was enforced by district administration. We just followed the traditional rituals. After this, Lord Jagannath would take rest for 15 days and will reappear during Rath Yatra," said Mr. Kumar.

To avoid any public congregation during the festival, section 144 of CrPC had been clamped in Puri from 10 pm on Wednesday. The prohibitory orders remained in force till 2 pm on June 25.

As many as five ASPs, 23 DSPs, 35 platoons of the police force and more than 150 police officers had been deployed to smoothen the organization of the holy festival and to maintain security purposes.

The gates of Lord Jagannath’s Puri abode - the 11th-century temple, are now closed. No devotees will be allowed to enter the temple for darshan. As per authorities, the temple would be open to the public from July 25, 2021, after the completion of the Rath Yatra.