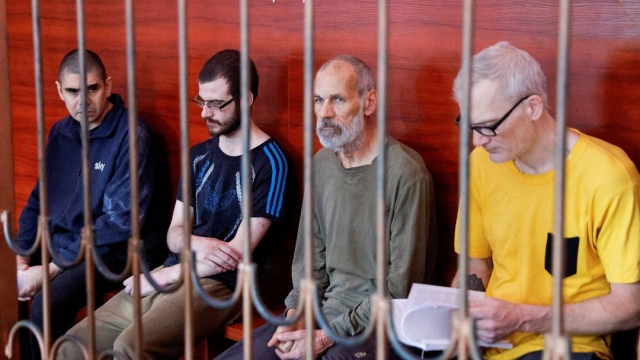 Briton John Harding, Croatian Vjekoslav Prebeg, and Swedish citizen Mathias Gustafsson during the trial. They can face the death sentence under the laws of the self-proclaimed Donetsk People's Republic. Source: Twitter.

On August 15, a trial started in the self-proclaimed Donetsk People’s Republic against the foreign soldiers arrested in June and charged with the accusations of fighting as mercenaries of the Ukrainian army and preparing terrorist attacks.

The next hearing, scheduled for October, will be held in a closed session.

Previously, Russian sources published a video in which one of the prisoners, the Briton Andrew Hill, supposedly confessed he was fighting as a mercenary for Ukraine. The man could be seen with bandages on his head and hand.

This triggered harsh reactions from the international community, first and foremost from Great Britain, which sharply criticized Russia for exploiting both civilians and prisoners of war for propagandistic purposes. In particular, the British government maintains that, as legitimate members of the Ukrainian Army, the prisoners should be treated according to the Geneva Convention.

Also, the European Court of Human Rights intervened in the issue. Accordingly, the court summoned Moscow to mediate in favor of the prisoners as the Republic is Russian-backed. Nevertheless, Moscow, which recognized the Donetsk and Luhansk People’s Republics’ independence, replied that the country no longer abides by and recognizes the ECHR. Consequently, it will be up to the Donetsk court to judge the prisoners. As the Republic is not internationally recognized, international forces will be unable to intervene to rescue the men.

The United Nations voiced its concerns as well, through the UN Human Rights Office (ONHCR). The Office reminded the international community that prisoners should be treated as human beings. Accordingly, it said, “Any unlawful act or omission by the Detaining Power causing death or seriously endangering the health of a prisoner of war in its custody is prohibited, and will be regarded as a serious breach of the present Convention.” Donetsk’s status as a non-recognized republic, though, makes it extremely difficult to implement anything coming from the official organizations operating worldwide.

Furthermore, according to the Russian version of Radio Free Liberty, the three Britons were not actively taking part in the hostilities. Accordingly, John Harding was supposedly working as a paramedic for the Azov Regiment, while Dylan Healy was involved mainly in the humanitarian mission in the area. As for Paul Ury, who died in prison on July 15, he was, as well as Healy, working as a volunteer for the distribution of humanitarian aid.

This is not the first case where foreign prisoners have faced a court trial in Donbas. Earlier, in June, three other prisoners were sentenced to death: two Britons, Aiden Aslin and Sean Pinner, and a Moroccan citizen, Brahim Saadoun. As Tass reports, the three prisoners hoped for a milder punishment and, therefore, submitted an appeal. Accordingly, Sean Pinner’s lawyer, Yuliya Tserkovnikova, stated that "It is the DPR’s court that will make a decision" and that "An alternative may be a life sentence."

In the meantime, the Justice Secretary, Dominic Raab, in his statement to LBC radio, tried to stay positive about the fact that prisoners will be treated according to international law. As reported by the BBC, he said, "I don't know all the details, but of course we would expect the laws of armed conflict to be respected, and we will make sure that we will make all the representations”.

Accordingly, Aiden Aslin and Sean Pinner, as their relatives confirmed, were officially working for the Ukrainian Army, and as such, they should be treated as regular soldiers and not mercenaries.

Nevertheless, until next October’s hearing, fears remain that these war prisoners may be used by the Donetsk People’s Republic, and by extension by Russia, one of the three countries that officially recognized the small state's independence, as strong political leverage.

This is the opinion of the Foreign, Commonwealth and Development Office (FCDO). Accordingly, in a recent statement, it declared that “We condemn the exploitation of prisoners of war and civilians for political purposes and have raised this with Russia.’’

In the meantime, the office is carrying out investigations on its own while providing any possible support to the prisoners’ families.