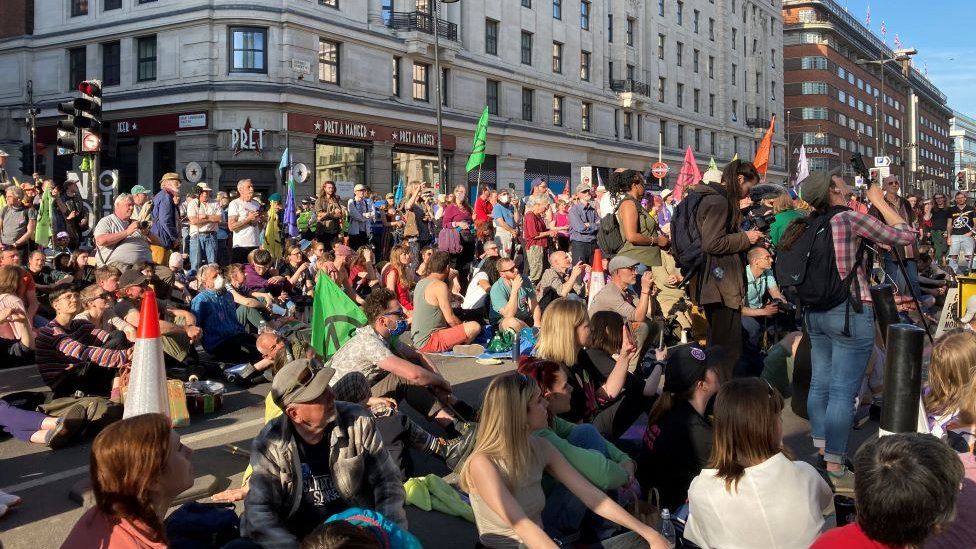 Amidst the Easter Bank Holiday weekend, seventy people were arrested across the capital at the protests against climate change.

On Good Friday,  the Extinction Rebellion activists protesting against fossil fuels blocked four London bridges. On Saturday, there was a detainment of six more people.

Saturday’s protests started as a group of climate-change activists meeting in Hyde Park but then spread quickly with chanting and marching throughout the city’s streets to “end fossil fuels now,” “End Fossil Filth” and holding signs reading “if not you, who? If not now, when?”, according to the Telegraph.

The Metropolitan Police tweeted at 12:02 p.m. on Saturday, saying they visited Bayswater Road at around 08:50 a.m. to deal with numerous demonstrators who had climbed aboard an oil tanker. Furthermore, they made six arrests for interfering with vehicles. The road is now available to traffic.

It was as if the Shell oil tanker drove out of the petrol garage on Bayswater Road where the protesters first occupied it. When they began climbing and supergluing themselves to the tanker wheels close to Hyde Park there was a call for their arrest. Olympic athlete and gold medal winner Etienne Stott and Olympian Laura Baldwin were among the six detainees.

According to the Telegraph, Olympic canoeist Stott said “[I want to] disrupt the toxic fossil fuel industry that is destroying everything we hold dear.” He also told The Guardian that he is conscious that his acts will enrage many people, and is willing to face consequences. He further stresses that our government, on the other hand, should be held accountable for policies that are jeopardizing Earth's ability to maintain human civilization.

Olympic sailor Baldwin told The Guardian that this is the most vital period in human history, and he feels compelled to do everything he can to promote awareness.

The group settled for the night once they had reached Marble Arch. Two protesters then glued themselves to the car rooftop in rebellion while another six locked themselves to it.

The Met Police imposed a public order to get the occupied areas cleared by 18:00. The protesters had spread across many streets in the capital, stretching across Marble Arch to Cumberland Gate.

213 people attending the Extinction Rebellion protests were arrested in April over the 10-day-long demonstration, states the Metropolitan Police.

What is our Government Doing to Improve Climate Change?