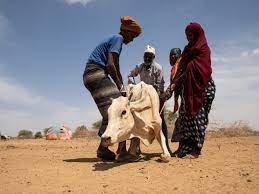 For several months, the Horn of Africa has been experiencing a period of great crisis, caused by the worst drought that the region has ever known; the last of equal severity dates back to 1981.

Three consecutive seasons of no rainfall have decimated crops and caused the death of livestock. The lack of water and pastures forced families to leave their homes and led to increased conflict between communities.

It has been estimated that as a result of this crisis 13 million people between Ethiopia, Kenya and Somalia will suffer from hunger; the almost total absence of harvests will lead to the death of hundreds of individuals and animals. The numbers could also increase, reaching 20 million, if the rains continue to be scarce, and the aid provided by other countries does not arrive in time or is not enough.

The particularly high rates of malnutrition in the region, especially those regarding children, could further worsen due to the extreme climate shock that different populations are facing. According to data provided by UNICEF at the end of April, all over the Horn of Africa, the drought is affecting at least 10 million children with hunger, malnutrition, and thirst. More than 1.7 million children need urgent care for severe malnutrition.

In Ethiopia alone, more than 60,000 children have already left school: in most cases, in fact, they cannot devote themselves to education because they have to travel long distances in search of food and water, or they have to look after other children while their parents go searching for supplies.

The impacts have been added to other already present issues such as increases in basic food prices, inflation, and low demand for agricultural labor, which worsen the ability of families to buy food. The number of people who do not have reliable access to clean and safe water is also constantly increasing. Hundreds of thousands of people have already left their homes, moving to other adjacent countries, or trying to emigrate to Europe, facing challenging and dangerous journeys.

Women are among the categories most affected by the crisis and are also at greater risk of gender-based violence, exploitation, and sexual abuse. Among the risks, there are also combined marriages involving minors, which increase in times of drought, when families give in marriage their daughters hoping that they are better fed and protected, as well as to earn money.

Similar crises have already occurred over the years leading to serious consequences both immediate and long-term; among the many humanitarian crises that happened in Africa, we remember that of 2011, when 250,000 people died of hunger in Somalia. In recent days, the situation has worsened, and the United Nations has called for immediate funding to support the Horn of Africa. “We urgently need money to save lives," said Undersecretary of Humanitarian Affairs, Martin Griffiths, after a two-day visit to Kenya, at a press conference in Geneva.

International bodies and non-profit organizations need to commit to providing aid as soon as possible, as the risk of losing lives on a large scale increases exponentially with each passing day.