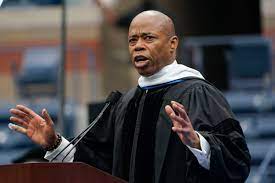 As graduation season rolls through, students wait eagerly to find out who will be speaking at their college’s commencement. At Pace University, located in New York City, New York Mayor Eric Adams spoke to the graduates. It seems incredible that the mayor would come and give a speech at this ceremony, as well as receive an honorary degree, but the announcement was met with mixed responses.

While some were delighted to hear from the mayor, many students felt like Adams doesn’t accurately reflect the beliefs of the student body. Many are against his former career as a police officer, and don’t agree with some of his anti-homelessness policies. This led to protests from the students, with signs being placed around Pace’s campus asking to sign petitions to prevent the mayor from coming to commencement and receiving his honor.

This response extended past campus and onto Pace University’s official social media as well. In an Instagram post announcing the news, comments were flooded with students airing their opinions. Comments like “tell me you know nothing about your student body without telling me you know nothing about your student body” and “Very upsetting decision. I don’t believe Mr. Adams shares the same values as myself and the rest of my class, and it is troubling that the administration at Pace has chosen to align themselves with him. His assault on people without homes, campaign to cut city programs including the education budget, and overall his lack of ethics and transparency as an elected official strike me as immediately disqualifying” garnered many likes, showing the shared opinions of the class.

During his speech at the commencement that took place at Billie Jean King Tennis Center on May sixteenth, the audience displayed their opinions. A lot of the students chose to remain standing, attentive to what he was saying, while other students chose to turn around during the speech. Adams displayed his knowledge as well, remarking that his message to the graduates was “Yes, protest. But then protect”.

Not even the mixed opinions on speakers could diminish the great work students have done over the past years of their college career. The ceremony also featured students from the class of 2020 and 2021, allowing them to get the ceremony that they weren’t able to get due to the pandemic. While Eric Adams being selected to speak was contested, a mutual agreement can be made that the hard working students were the real stars of this commencement.