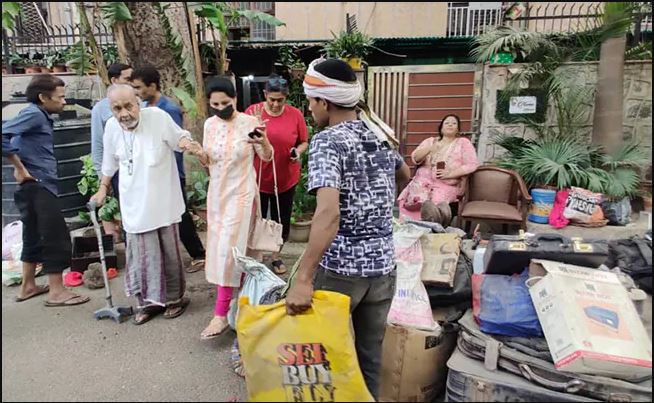 90-year-old legendary Odyssey dancer and Padma Shri awardee Guru Mayadhar Raut is among several well-known artists who are being evicted from their government accommodations. According to the legend’s family, allegedly, the eviction officials removed belongings of the aging artist and that too without prior notice. While the artists have overstayed in the government homes, the manner of conducting the eviction has essentially been the driving factor which has sparked a controversy.

90-year-old Padma awardee guru Mayadhar Raut sits broken-hearted, watching as authorities evict him, a renowned Odyssey dancer from the government accommodation which has been his home for decades. Within hours of the government order asking the legendary artist to vacate the government allotted resident, eviction officers landed at his home in New Delhi's Asiad Village. A framed certificate of Padma Shri award which is India's fourth highest civilian award was seen lying on the street as Guru Mayadhar’s belongings were forcibly removed.

Madhumita, the daughter of the awardee remarked that no time was given to her elderly father prior the eviction drive, alleging that the state has no respect for the Padma awardee. She further added, “I’m in a state of shock, I was alone here with my father and as you know he's very old. He's about 90-years and above and he's a patient of asthma with high BP. He's hard of hearing and is suffering from macular whole due to which he can't see properly. And just when I was serving him lunch at 1:15 PM, they came and they said that they are here to evict us”. She asks as to how can the government award him with Padma Shri and then evict him without even an hours’ notice, knowing that their case is listed at High Court.

Madhumita explains the eviction as cruel and inhuman and that it has put father is in a state of shock. Several other artists many of which are elderly, who've been residing in government allotted bungalows for decades are now facing ouster. The artists include Mohiniyattam dancer Bharati Shivaji, Kuchipudi dancer Guru Vijay Rama Rao, Dhrupad Singh Ustad Wasifuddin Dagar. The wife of KR Subbanna, Mrs. Seema said that, “the way they treated her today, this is not the way to be even if they were in a such kind of hurry that the house should be vacated. They should have given her a last warning.  The officials should have provided them with one week or ten days or one-month time to act on the notice, like any civilized dignified person. “

The government and the high court have ruled that artists cannot continue to occupy government housing beyond the allotted period. Meanwhile, lawyers of these artists have knocked on the doors of the high court seeking a few more days to vacate the houses.

Have the artists overstayed their welcome way beyond the permissible limit is the manner in which this eviction drive being conducted, an insult to the dignity of India's celebrated artists.