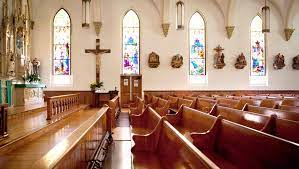 In 2017, the hashtag #ChurchToo accompanied a movement exposing sexual abuse in the church, listening to survivors’ stories, and pushing for reforms. Now, that movement is growing again.

For years, survivors and social activists have been working to uncover evidence of abuse that the church has kept hidden for so long. In recent weeks, #ChurchToo has finally begun to trend again as sexual predators are being held accountable.

May 22 was an important day for the movement’s momentum. In Warsaw, Indiana, a video surfaced at New Life Christian Church and World Outreach of a victim calling out her abuser: the pastor.

In the video, courtesy of the church’s Livestream, the pastor confessed to committing adultery 20 years ago. He received a standing ovation, the congregation applauding him for what they believed to be courageous honesty.

Then a woman approached the front of the hall and took the microphone, correcting the pastor that it was 27 years ago, not 20, when he raped her. The victim was 16 at the time.

The pastor’s lie, formulated as a confession of adultery, exemplifies decades of efforts to hide sexual assault within the church. The same day that the video surfaced, a report exposing sexual abuse by Southern Baptist Convention leaders was released.

Since the report surfaced, multiple top Executive Committee leaders have resigned. The Southern Baptist Convention is currently convening at its national meeting in Anaheim, California, where the report will be discussed.

Just days after the report and video surfaced, the movement gained more momentum when former Christian lobbyist and reality TV star Josh Duggar was convicted of receiving child pornography. Duggar lobbied for a conservative Christian organization and starred in “19 Kids and Counting,” a reality show centered on traditional Christian courtship.

The show was canceled in 2015 following allegations that Duggar had molested his sisters, but he was not sentenced to prison until last Wednesday.

Amidst a whirlwind of events tying countless church leaders to sexual abuse and manipulation, it’s not shocking that #ChurchToo is trending. Activists are working toward tangible solutions before the commotion dies down again.