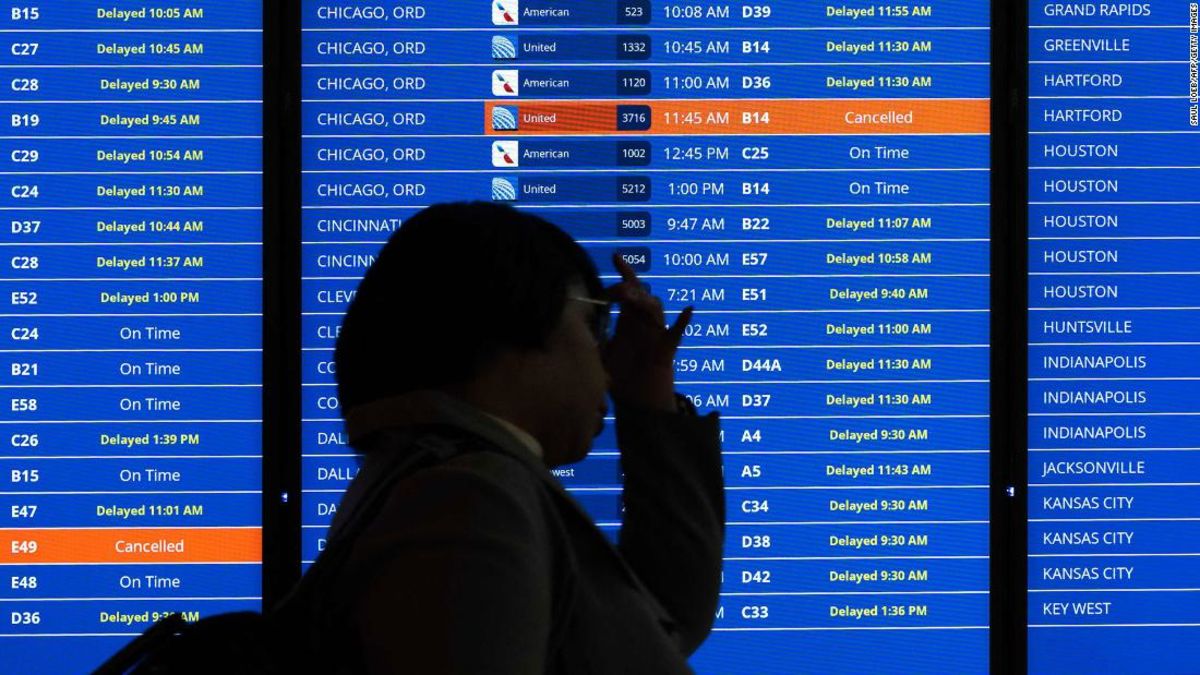 The Federal Aviation Administration (FAA) system recently lifted an airplane ground stop on Wednesday after a system outage occurred on Tuesday that caused thousands of flight cancelations and delays across the United States.

The system outage was caused by a failure in the FAA’s Notice to Air Missions (NOTAM) system, which informs pilots of flight conditions to ensure safe travel for all passengers. As a result, all active flights during the outage were able to reach their destinations safely, but more than 1,100 flights have been canceled as of Wednesday morning, along with 7,800 flights being delayed. FAA plans to continue to investigate the cause of the outage.

“Normal air traffic operations are resuming gradually across the United States following an overnight outage to the FAA’s Notice to Air Missions (NOTAM) system that provides safety information to flight crews," the FAA wrote in its fifth statement. "The ground stop has been lifted. The agency continues to look into the cause of the initial problem.”

In addition, airlines such as United, Delta, and American have decided to cancel and delay flights for Wednesday as the FAA’s website has continued to show ground delays and stops at some airports. Moreover, United and Delta have issued travel waivers in response to the outage, while American Airlines has allowed customers to rebook their flights for Wednesday or Thursday with no additional fees.

Furthermore, airports in Chicago, Los Angeles, New York, and Atlanta have delayed between 30% and 40% of their flights. Southwest Airlines has canceled 9% of its flights and detained 47%, making it the airline with the most flight cancellations following the thousands of flights canceled after Christmas weekend due to a system meltdown

“As a result of the FAA’s outage, we anticipate some schedule adjustments will be made throughout the day,” Southwest said in a statement. Southwest has also issued waivers to allow travelers to change their flights.

Transportation Secretary Pete Buttigieg asserts that “these kinds of disruptions should not happen,” and he is working on “ understanding exactly how this was possible and exactly what steps are needed to make sure it doesn’t happen again.”

“Today’s FAA catastrophic system failure is a clear sign that America’s transportation network desperately needs significant upgrades," U.S. Travel Association President and CEO Geoff Freeman said in an article. "Americans deserve an end-to-end travel experience that is seamless and secure. And our nation’s economy depends on a best-in-class air travel system. We call on federal policymakers to modernize our vital air travel infrastructure to ensure our systems can meet demand safely and efficiently.”

The news of the outage has also reached President Biden, who is unaware of the cause behind the outage and asks Buttigieg for the reasons to be reported directly once they are revealed to him. Although, White House press secretary Karine Jean-Pierre said in an article that “there is no evidence of a cyberattack at this point.”

Consequently, many passengers have had to adjust to the changes in their flights. Heather Allen (32) was supposed to fly from New York City to Seattle with her fiancé to see her family after her plans were delayed. She was asked to get off her Delta Airline flight after she recently boarded from the tarmac at John F. Kennedy International Airport.

“I’m trying to be patient, but I’m feeling frustrated,” Allen said. “The situation at the airport is currently not chaotic, but it could be if delays are longer.”

Julia Macpherson was on a United Airlines flight from Sydney to Los Angeles when she learned of possible delays. “As I was up in the air, I got news from my friend who was also traveling overseas that there was a power outage,” Macpherson said. She said she had already experienced a delay in her flight because her original flight from Melbourne to San Francisco was canceled, which caused her to rebook her flight from Sydney to Los Angeles.

Additionally, the delays and cancelations of U.S. flights have ripple effects at some airports abroad, but non-American airlines have continued to operate flights as scheduled. The international airport operator Aéroports de Paris, or Airports of Paris, has said that their U.S-bound flights are still scheduled and unaffected by the FAA outage. Still, they will keep an eye on the situation.

In sum, Wednesday’s incident is known to be the second aviation crisis of 2023, happening only days after the flight cancelations of Southwest Airlines. Flight cancellations and delays have a more significant impact on passengers, who are left in a chaotic state along with pilots. Sen. Maria Cantwell, D-Wa., who heads the Senate Commerce Committee that oversees the FAA, has responded by saying she will investigate the matter.

“The number one priority is safety," Cantwell said. "As the Committee prepares for FAA reauthorization legislation, we will be looking into what caused this outage and how redundancy plays a role in preventing future outages. The public needs a resilient air transportation system.”