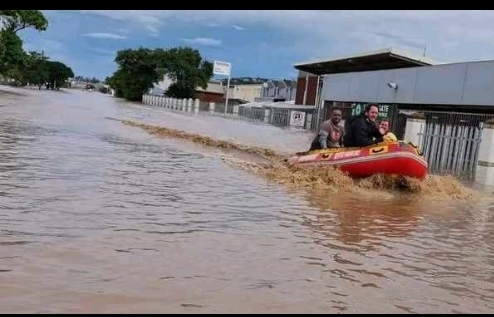 According to an article reported by the Sowetan live on Sunday, the floods swept away a police officer who was reported missing on Saturday. It was then reported that the warrant officer's body was found in Mofolo South on Sunday by the search team.

The Sowetan live also reported that the officer was an in-transit VIP Protector who had served in the South African Police Service for fifteen years and that he was in a vehicle with two other officers who managed to escape when the floods occurred.

The social talks spoke to some residents in Soweto who confirmed the damage caused by the rains saying they were also affected.

Sqalisile Moyo from Bramfisherville phase 4 in Soweto said, "There was so much water, the yards and the streets were totally covered. I was even late for work since the streets were not usable. The transport I boarded was stuck in traffic for quite some time as the water levels were almost covering the wheels of the taxi we were in."

"Those who stay near the river were the ones who were mostly affected as the floods were getting inside the houses destroying furniture and other valuables," another resident said.

Early this year in April, BBC news reported that floods in Durban claimed many lives with mudslides trapping people under buildings. The floods disrupted communication, electricity service and water. While the search for a three-month-old baby continues, that was swept away by a flash flood on the Jukskei River during a baptism ceremony.

News 24 reports that most people living on the banks of Jukskei River in Alexander are now homeless after the destructive heavy downpours. The floods report having left behind a trail of mass destruction along with resident homes washed away to the riverbanks. The heavy rains affected most of the region of Gauteng. More rain will keep falling and people are encouraged to be on the lookout as it may damage a lot more havoc.