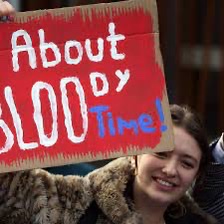 Recently Scotland made headlines as it became the first country in the world to make access to free period products a right. The law came into force on Monday, 16 August 2022.

The Period Products Act declared that necessary items would be accessible to individuals who needed them or couldn't afford them. The law was a bold move taken to tackle the crisis of period poverty which has left millions of menstruators worldwide unable to tackle periods, leaving them susceptible to diseases and other health issues.

The social justice secretary of Scotland, Shona Robinson, said that providing access to free period products was 'fundamental to equality and dignity and that Scotland was 'proud' to be the first country to have taken such a step.

Scotland's decision comes as a small yet welcome relief amidst the cost of the living crisis currently taking over the UK. With food prices and bills rising, many individuals have described having to choose between necessities such as food, heating, and hygiene products.

One mother described the crisis of period poverty as having to choose between tampons or a box of pasta that would feed her children for a few days. Many resorted to desperate measures such as using tissues or newspapers.

In light of this, Scotland is a model for other countries, ensuring that menstruators will never have to risk their health and dignity to live.

In comparison, India faces one of the world's most significant periods of poverty crises. Of India's 355 million menstruating female population, only 35% use sanitary towels for protection. This statistic is jarring because it fails to account for non-female identifying menstruators.

Besides that, education and social awareness surrounding poverty are poor. For example, a zine known as The Swaddle recently ran a series called 'Bloody Lies' where they tackled real-life myths surrounding menstruation. The stories ranged from offensive to ridiculous, with some saying menstruators would attract snakes to men who touched period-blood-stained clothes, having their lives shortened.

The lack of awareness is highly concerning when a menstruator's welfare as 1 in 10 girls aged below 21 in India is unable to afford sanitary products. Many individuals are unaware of the option to use tampons, period underwear, or menstrual cups due to a culture of shame around the discussion of periods.

Scotland's decision is a beacon of hope for millions. It will stand as an example for other countries to follow suit and ensure that menstruators have access to essential period products.

The State of Girls’ Education in Pakistan

The Plight of Women in Afghanistan

Movies And The History Of Feminism