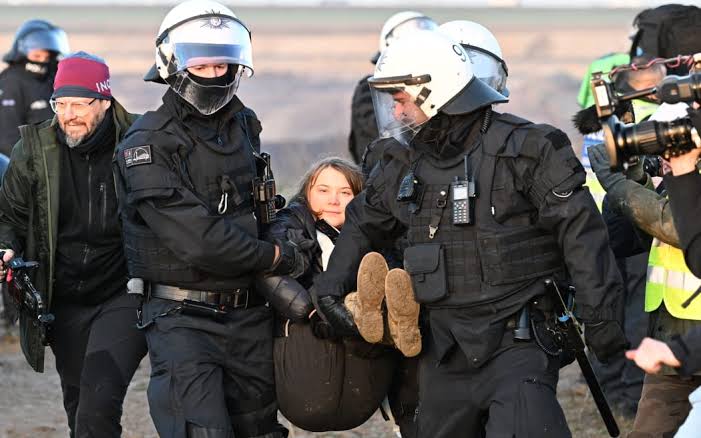 Greta Thunberg known for her bold stances and fierce take on activism has been detained by German police in Lützaerath.  She was part of a group protest against the expansion of coal mine which includes demolishing of the mining town there.
Miss Thunberg called for a strike on Friday in her tweet and several joined to take part in protests. On Sunday, they were physically removed from the site and on Tuesday, arrests were made.

The pinpoint is that the expansion of coal mine violates the Paris Climate Agreement made in 2015. Activists argue that the mine expansion and coal emissions will release greenhouse gases and harmful discharges of lignite coal which in length would contravene the Paris Agreement of limiting carbon emissions. Opting coal for fuel would clearly violate the goal to limit global temperature rise to 1.5 degrees Celsius.

Owned by RWE, the Garzweiler lignite coal mine has been working on this coal project since 2017 and the cout ruling for demand of  expansion goes back to 2013. So there has been a long tussle between activists and expansionists for a considerable time. Many farmers have left the land since then and remaining eviction operation is held by almost 1000 police officers charged there. Recent two years have made Germany a flashpoint for climate protests especially Lützerath. RWE has further plans to seal the village via a 1.5 kilometer fence around it.

From a climate preservation point of view, both sides have their claims. The company RWE projects that this expansion would not increase the overall emissions. The use of European caps will balance out the extra carbon emissions. Also, the coal would help meet the energy crisis brought by Ukraine War. It also agreed that till 2038, the expansion project would ease out. As far as climate activists are concerned, they are fiercely against the coal project. They assert that Germany should have green policies and climate oriented schemes instead of opting coal fuel. They completely reject the RWE claim of un harmful residue as a result of this project.

Climate reporters suggest that clean energy and fuel transition from fossil fuel should be met.
A thought provoking point is that, a report from International Research Platform Coal Transitions claimed that there are already sufficient supplies of available coal, even coal amounts can last till the end of this decade. Some studies also show that Germany has enough resources for energy production and coal expansion is not needed.

As for now, arrests and detentions are being made to remove activists from Garzweiler mine site.