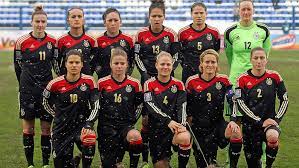 Despite several other nations’ push toward gender equality in athletics, the German Football Association has refused to grant equal pay for men’s and women’s national team players.

Germany is currently competing in the UEFA Women’s Euro competition, the largest women’s soccer tournament in Europe and the second-largest in the world. If they win, they will only receive a fraction of the earnings granted to their male counterparts.

If the men’s team won their tournament, they would have earned $407,000. But if the women’s team secures the victory, their earnings total a mere $61,000.

Germany’s women’s national team has been a powerhouse for years, winning eight of the last 12 Euro competitions. The team secured a spot into the quarterfinals on Tuesday after defeating Spain 2-0.

The tournament’s opening match between England and Austria attracted a whopping 68,871 spectators- setting the record for the largest crowd in Women’s European Championship history. Though Germany didn’t play in the opener, the record-breaking crowd represents a growing appreciation for women’s players that hardly reflects the German team’s earnings.

In the weeks following the tournament, Spain announced an agreement granting equal pay and travel conditions for the men’s and women’s national teams. The Netherlands agreed to equal pay in victory bonuses for their teams and overall equal pay beginning in 2023. Switzerland’s main sponsors also granted equal bonuses to their teams for this year’s competition.

Last month, the U.S. Soccer Federation became the first group to equalize prize money for the world’s largest women’s soccer tournament. As a result, men’s and women’s American teams will earn the same amount if they win the World Cup.

Advocates for the women’s team argue that those financial realities should not directly translate to athlete earnings disparities. All countries deal with similar revenue concerns, but the equal pay agreement is about more than just profit.