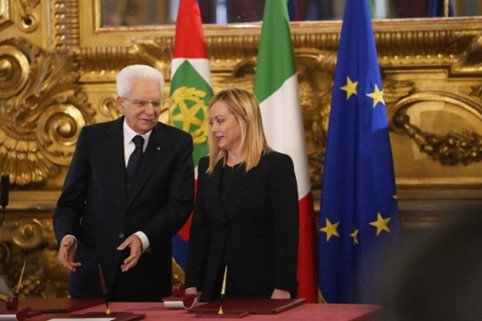 The far-right leader Giorgia Meloni won Italy’s election on 25 September, becoming the first female prime minister in the country. A right-wing alliance government was the most likely outcome of the election, but the result still alarmed much of Italy and Europe as a whole, as a right-wing government hasn’t been seen in Italy since WW2.

The alliance between PM Silvio Berlusconi’s center-right Forza Italia and Matteo Salvini’s far-right League won victory with 26% of the vote in Sunday’s elections. So how might this impact the country’s policies and cultural ties? It has already caused tensions in Europe.

President Ursula von der Leyen congratulated Meloni, in a tweet: “Congratulations to @GiorgiaMeloni on her appointment as Italian Prime Minister, the first woman to hold the post. I count on and look forward to constructive cooperation with the new government on the challenges we face together”.  Replying, Meloni tweeted: “Many thanks President @vonderleyen. Eager and ready to work with you to strengthen EU resilience towards our common challenges”.

Indeed, Meloni defines herself as Catholic and a defender of the traditional family, supporting “traditional moral values”. In her campaign, Meloni had promised to “govern for everyone”, but emphasized declarations on ‘prevention’ and ‘sex education’ targeting same-sex marriage and relationships, and L.G.B.T.Q. activism.

The beginning of Meloni’s government coincides with the 100th anniversary of Mussolini’s power and thousands of fascists marching to Rome ascending to power in the Kingdom of Italy in 1922.

On Sunday 23 October, a formal ceremony took place at Palazzo Chigi the official residence of the Prime Minister of Italy in Rome. At Salone dei Geleoni, she received the cabinet debate bell from Mario Draghi, who was her predecessor.

Notably, Pope Francisco stated at the beginning of this weekly Angelus that he prayed for “unity and peace in Italy”.

The new Italian government has to face some huge issues in Europe: the response to Russia’s invasion of Ukraine, the economic crisis, and the migration debate.