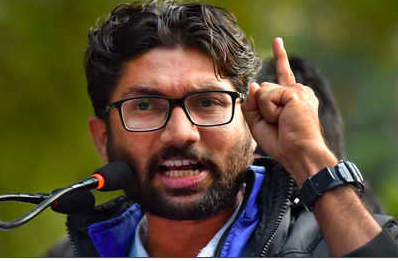 On Monday, April 25, Jignesh Mevani, an independent MLA from Gujarat, was granted bail by a Kokrajhar Court in Assam. Jignesh Mevani had been elected from Gujrat’s Vadgam as an independent MLA but extended his support towards the Congress Party. He was arrested on April 19 after his tweet against PM Narendra Modi where he mentioned the Prime Minister "considered Godse as God”, in relation to Nathuram Godse. These tweets have now been removed from the site by Twitter.

A First Information Report (FIR) was launched against Mevani by a BJP leader, Arup Kumar Dey, in Assam because of which Jignesh Mevani was arrested in Palanpur town in Gujarat. He was then brought to Amhedabad after which he was transported via flight to Guwahati, Assam and then taken via road till Kokrajhar. Upon hearing about the arrest, Gujarat Congress President and other members of the party arrived at the Ahmedabad airport and objected with slogans against the BJP Government. He was kept in custody for three days before the trial which ended on Sunday, April 24.

On Sunday, Mevani was brought in front of the court and the session continued for about 2 hours. The court’s verdict was to send Jignesh Mevani to a one day judicial custody. Congress leaders protested in Assam to support Mevani during his arrest.

His bail was granted on Monday by First Class Judicial Magistrate Bhavna Kakoty with conditions but soon after he was released on bail, Mevani was re-arrested on other grounds. He resisted the officers on duty and allegedly assaulted a woman officer. Within minutes he was re-arrested by the Barpeta police and booked under Section 323 (punishment for voluntarily causing hurt), 353 (assault or criminal force to deter public servant from discharge of his duty) and 354 (assault or criminal force to woman with intent to outrage her modesty) of the Indian Penal Code for the assault on the woman officer.

Mevani had received bail in the first FIR filed in the Kokrajhar Police station but was re-arrested due to a complaint in the Barpeta Police station. He has now been remanded to a five day police custody for the assault on the female officer. Mevani's counsel, Angshuman Bora to move the case to a higher court in Barpeta but remains optimistic on the judgement of the judiciary.