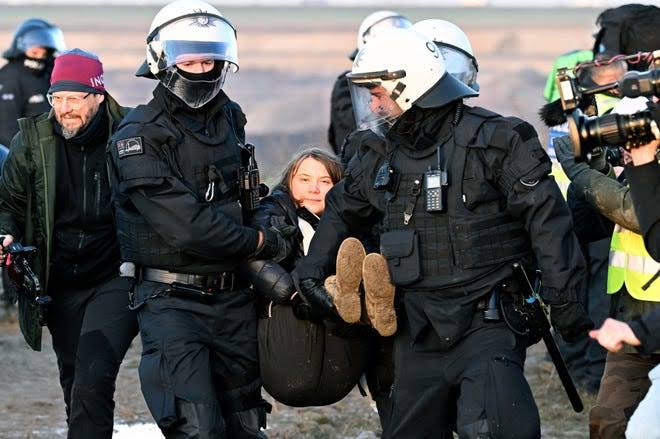 During a demonstration against the expansion of a coal mine in western Germany on Tuesday, Greta Thunberg was taken into custody by German police. According to reports, Thunberg and other activists were detained while they were taking part in a sit-in close to the mine's edge. About 20% of Germany's carbon emissions come from the mine, one of three enormous open-pit coal mines in the German state of North Rhine-Westphalia. To lower the nation's carbon emissions, the protesters want the mine to close earlier than expected.

Swedish environmental activist Greta Thunberg is well-known around the world for her work battling climate change. At the age of 15, she started holding demonstrations in front of the Swedish parliament in August 2018. Thunberg's actions propelled the worldwide climate strike campaign Fridays for Future by inspiring students all around the world to take part in comparable demonstrations.

She has spoken to international leaders at the COP24 climate summit, the World Economic Forum, and the United Nations Climate Action Summit. In 2019, Time magazine selected Thunberg their Person of the Year. She has received a Nobel Peace Prize nomination.

Obsessive-compulsive disorder (OCD), Asperger syndrome, and selective mutism have all been identified in her.

Vegan and a supporter of animal rights. Some politicians and media personalities have criticised her, questioning her message and strategies. Thunberg has also been commended for her leadership and dedication to combating climate change, as well as for receiving support from numerous other politicians and activists.