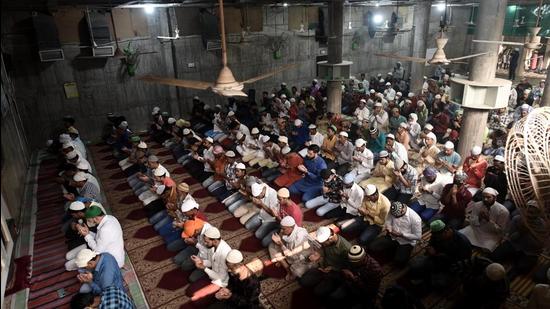 The Gurdwara association located in Sadar Bazar in Gurugram has initiated to provide space to Muslim devotees for their Friday prayers after the city management discontinued 37 public places for Namaaz after protests from local residents and Resident Welfare Associations (RWA).

"It's 'Guru Ghar', open for all communities with no discrimination. There shouldn't be any politics here. Basement is now open for Muslim brothers who want to offer 'Jumme ki namaz'," said Sherdil Singh Sidhu, President of the Gurudwara Guru Singh Sabha.

"If there's an open space, Muslims should be allowed to offer namaz. We shouldn't fight over such petty issues. People who were offering namaz openly sought administration's permission and those who had problems should have approached the administration before attacking them," he added.

The association has offered the basement of the Gurudwara for Muslims, adding that the covid protocols will be taken care of by the management. The sabha consists of five gurudwaras located in Sadar Bazar, Sector 46, Sector 39, Jacobpura, and Model Town and can welcome approximately 2,500 devotees at once. The Sona Chowk Gurudwara, one of the first Sikh places for prayers in the Haryana district built in 1934 has done the same. Akshay Yadav (40) who owns a shop in Sector 12 also offered a place for Namaz.

“I offered the place in a heartbeat and I will continue to do so today and tomorrow, again and again,” said Yadav.

Mufti Mohammad Saleem, Jamiat Ulama’s president expressed his gratitude and called the offer “gracious”. After talking with the representatives of Gurudwara they have decided to practice Namaaz at Sadar Bazar and Sector 39 this Friday.

“This is a very welcome step and will go a long way in promoting harmony among communities,” said Saleem.

The permission to certain places was canceled after various protests were held in Sector 12 of Gurugram over Friday prayers held on roads and open areas. On November 3rd, the city administration canceled 8 places for Namaz. The places include V-Block DLF-III, Surat Nagar Phase-1, Sector-68 near village Ramgarh, Bengali Basti Sector-49, Outside Khedi Majra village, on Dwarka Expressway near Daulatabad village, village Rampur to Nakhdola Road, and Near DLF Square Tower.

Anil Vij, Home Minister of Haryana commented on November 7 that religious rituals should be concluded inside religious places. He added that these events should not take place on highways without authorities’ permission. Earlier on November 5, BJP member Kapil Mishra appeared at the Govardhan Pooja held in Sector 12A in Gurugram which was the spot for Friday prayers. The pooja was organized by Samyukt Hindu Sangharsh.

A committee has been set up by Deputy Commissioner Gurugram to find places for Namaz. The committee will help in talking to the locals and settle any disputes so that locals can offer Namaz in that area without any issue. It will also ensure that these Friday prayers aren’t held in public places like roads and highways. Sub Divisional Magistrates (SDM), Assistant Commissionaires of Police (ACP), and other members of Hindu and Muslim Groups are also a part of this committee.