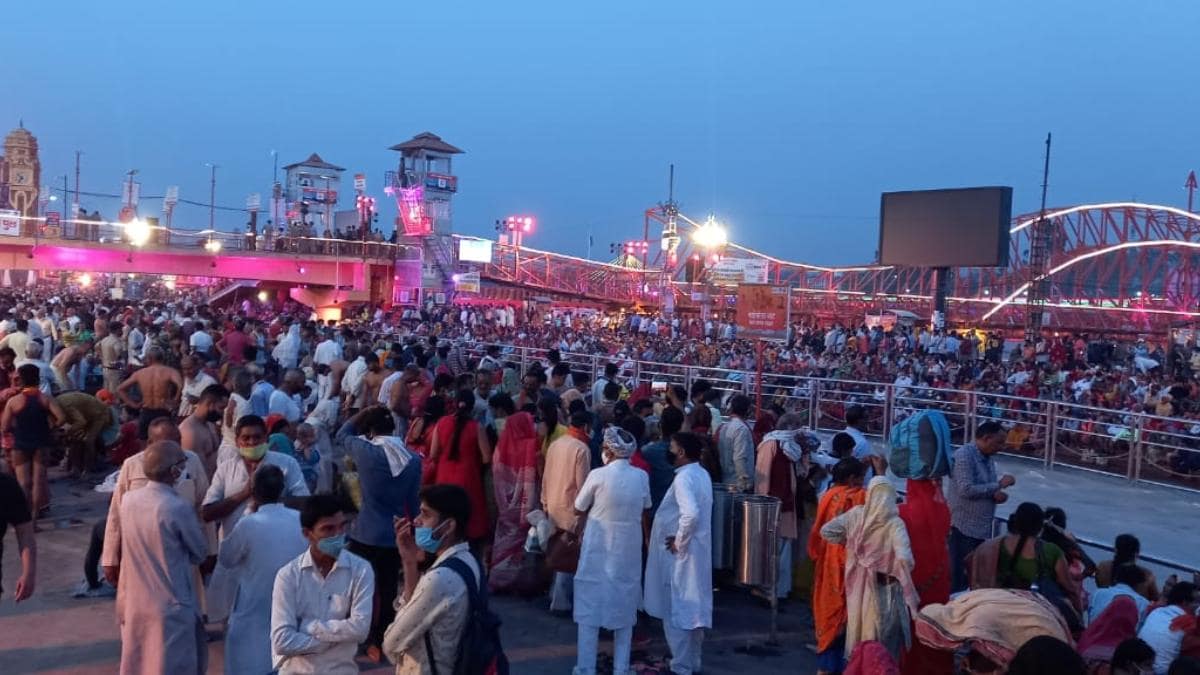 Covid is still not over, and only a few days back, India came across a shocking incident of thousands gathering at Kempty Fall amidst covid. Despite that irresponsible act, a large crowd was noticed at Har-ki-Paudi in Haridwar on 10 July. After Himachal Pradesh, Uttarakhand is the next spot for Indians.

In the latest viral video from Har-ki-Paudi, people were captured violating covid guidelines. Many pilgrims were spotted not following social distancing at the ghat and the local market area. However, few wearing masks.

Yesterday, the Manali administration laid down strict rules for citizens violating covid guidelines after the pictures from Kempty falls went viral over the internet. According to ANI, anyone ignorant to covid directives will have to pay Rs 5,000 as a fine. And can be jailed for eight days. Before this, 3-lakh challan had already been issued, for not adhering to covid norms. Meanwhile, in Mussoorie, only 50% of tourists are allowed at tourist spots.

The Nainital high court Is not in favor of the Uttarakhand government lifting weekly lockdown, so, they asked the state government to review their decision once as it might give its way to delta variant of coronavirus in major cities in Uttarakhand.

Delta virus is spreading in the country, and besides this, two residents of Uttar Pradesh have been found infected with the new Kappa virus. Whereas, Delta plus variant has been found in the neighboring cities of Uttarakhand. According to sources, a new Lambda variant is being spread globally, but fortunately, there is no such case of Lambda virus yet.

The Nainital administration, on seeing a sudden crowd on hill station banned the entry of two-wheelers on weekends. This ban may act as an aid for reducing traffic congestion and may stop crowd gathering.

Further, the Uttarakhand Chief Minister Pushkar Singh Dhami had restricted the hotels in Nainital and Dehradun to exceed their occupancy by more than 50%. According to many experts, the third wave of covid is just around the corner, and every state government is worried and taking action even after the relaxation of lockdown.

“We have issued an order regarding 50% occupancy capping in hotels in Nanital and Dehradun. Challans are being issued to those violating covid protocols. The Uttarakhand government is making efforts and will follow guidelines to stop the spread of the virus” Pushkar Singh Dhami to ANI.

Meanwhile, the Uttar Pradesh government has given its allowance to Yearly Kanwar yatra to pilgrims amidst covid. Uttar Pradesh chief, Secretary Navneet Sehgal told that UP’s Chief Minister, Yogi Adityanath has taken this decision with due respect to covid guidelines. He has asked his officials to coordinate with Bihar and Uttarakhand government to ensure covid adherence. The directives will be issued soon. According to the Hindu calendar, the Kanwar yatra will start on 25 July.

A massive responsibility is over Uttarakhand government after facing criticism for crowd gathering during Kumbh earlier this year, and the immense crowd at Har-Ki-Paudi again for handling the number of people and following social distancing.

Emergence of telemedicine amid Covid-19 pandemic