Humanity Murdered!!! Chinese journalist Jailed and battling death for her sheer courage and inquisitiveness to bring out the truth during the initial stages of the Covid Pandemic in Wuhan 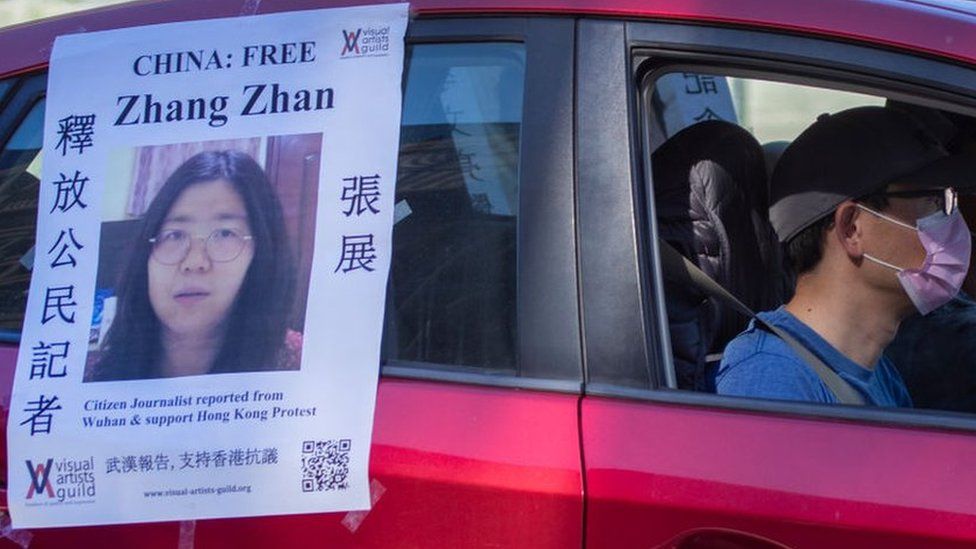 Zhang Zhan is a 38-year-old Chinese citizen journalist and a former lawyer. She is one of the brave journalists who set out on a hunt in search of nerve-wracking facts behind the Covid -19 Pandemic in Wuhan. As per reports, she traveled to Wuhan in February 2020 to unveil the facts and prepare documentation, shreds of evidence in means of the live recording of videos where government officials could be seen incarcerating sovereign reporters and persecuting the families of COVID-19 patients. She had posted the same on social media to spread awareness.

Due to her courageous moves and her relentless effort in bringing out the dark secret of Chinese officials she was detained by the Chinese authorities in May 2020. Afterward, she was found culpable of "picking quarrels and provoking trouble" under a broadly defined arrest used to stifle conflict. Which is a popular clause used by the Chinese Government to detain Journalists. As per reports from BBC, Zhang was among several journalists arrested in Wuhan but was the first one to be convicted. She has been sentenced to 4years of imprisonment. She was implicated for sending “false information through text, video and other media through the internet media such as WeChat, Twitter, and YouTube”, and also for having “maliciously speculated” during conferences with the foreign press, as per the accusation paper. It is to be highly noted that China is named” world's worst journalist jailer”. 274 journalists were in jail due to their work as of December 01, 2020, a figure that exceeds the high of 272 recorded in 2016.

Since her detainment in June 2020, Zhang has reportedly started a hunger strike in protest and has severely fallen sick. Her medical conditions have worsened so far that she had to attend the trials sitting in a wheelchair. Her brother recently revealed in a tweet that she might not survive the winters as she is underweight (40kg whereas her height is 177cm). It is also reported that the officials tried hard to force-feed her through tubes. The Journalists who risk their lives to bring out the supremacy of truth are facing this kind of brutality. This is not only a threat to a Journalist as a professional but also is strict violence and curb of human rights. Human rights have said that the journalist needs to be released on medical grounds as early as possible. Here a country is bleeding for her brave daughter; a brother is seeking justice and rights of a vigilant, lawyer and a promising journalist. Her life deserves respect, her deeds need to be honored.  "Zhang Zhan, who should never have been jailed in the first place, now appears to be at grave risk of dying in prison. The Chinese authorities must release her immediately so that she can end her hunger strike and receive the appropriate medical treatment she desperately needs," said Gwen Lee, China Campaigner at Amnesty International.

The detained Chinese journalist Zhang Zhan has been nominated for a Reporters Without Borders (RSF) press freedom award for courage, recognizing her contribution towards reporting from Wuhan in the early weeks of the pandemic. In its nomination on Monday, RSF said Zhang had withstood “constant threats from the authorities” to live-stream her video reports from Wuhan’s streets and hospitals which shows the harassment faced by families of Covid 19 patients. Widely shared on social media, her reporting was one of the main sources of independent information about the health situation in Wuhan at the time,” it said.

Zhang Zhan truly represents the hope of the Chinese people that some brave people will keep doing journalism,” Alviani said. “That they go where something happens and keep reporting. The Chinese people, like every human on Earth, crave information on what’s happening around them.” The RSF east Asia Bureau head, Cédric Alviani, said Zhang was a symbol of journalism in China under growing government oppression and regulatory restriction. The issue about journalists must be acted upon immediately. It is highly demotivating and devasting to hear such news. This is now the millionth time that a women's right is curbed and the world is just watching. Even in the attack against Afghanistan women the world sat silent and saw the oppression fearing the opponent. This will provoke and encourage such heinous crimes. A government is supposed to be the protector of its civilian's rights whereas here the protectors have become predators of Human rights. An immediate inquiry needs to be initiated and the truth must be prevailed and be honored. All lives matter. Justice matters and above all we should let the truth prevail.