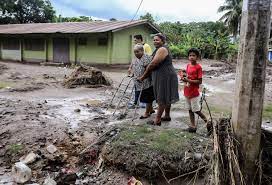 Tropical storm Julia made landfall and turned into a hurricane on October 9 on Nicaragua's central coast. It is classified as a Category one hurricane by the National Hurricane Center (NHC) and is expected to cause massive damage to houses and landscapes till it dissipates.

The winds travelled at a rate of 85 miles per hour, accompanied by torrential rains, causing flooding and power outages. Everyday life in Costa Rica and Panama has also been affected.

Civil defense brigades have been constantly on their feet, clearing out the fallen trees from the roads. They have also been keeping a check on flooding conditions at coastal settlements and villages. Additionally, flash flooding and mudslides have been triggered across Central America, calling for immediate action.

As per forecasts, Julia is slated to "weaken to a tropical depression" on October 10 and dissipate by the next day. Despite the fact that it is nearing its end, it has continued to wreak havoc on Nicaragua and its neighbors. It has been intimated that the Isthmus of Tehuantepec in Mexico could face about 2 to 6 inches of rain throughout the coming week. Fearing casualties, the Colombian President has had San Andres and the Providencia islands under close watch with curfews and prohibitions on air transport in place.

Following preliminary instructions, the armed forces had evacuated about 6,000 people from Nicaragua earlier. The displaced were mostly from Laguna de Perlas and the Miskito keys located off the coast, amongst others. The State also organized means to drop humanitarian supplies in the harshly affected areas, which constituted about 118 shelters.

Moreover, hotel institutions were requested to stay open for people who were hurt or lost their homes. The fishing community in a Nicaraguan town figured out ways to protect their boats. Inhabitants stocked up on cash and essentials before the storm hit and the vessels on the coast sought harbour. Meanwhile, in El Salvador, which is likely going to face the worst of the hurricane on October 10 and 11, 61 shelter homes have been set up based on directives given by the minister of environmental and natural resources.

Perhaps the State's desperation to avoid fatalities to the best of its ability comes from the agitation caused by Hurricane Ian that battered Florida and Cuba last week. It was a Category four storm that uprooted 127,000 houses and killed about 100 people.

It is important to recognize that deadly storms have become increasingly frequent in recent years. Natural disasters are in the making due to human-induced climate change, with temperatures rising unprecedentedly. While setting up task forces for immediate relief action when needed is a starting point, human society needs to deliberate on its role in the devastation that continues to unfold.