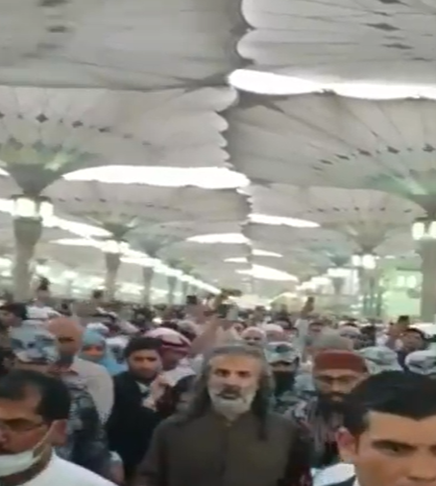 Reports from Geo News indicate that the members that had done this disrespectful act in the Masjid An Nabawi were the supporters of the PTI party. The incident had occurred during the PM Shahbaz’s invitation to visit Saudi Arabia a couple of days before to meet the crown prince Mohammad bin Salman bin Abdulaziz.

According to reports from numerous sources, including Geo News, upon the prime minister's entrance, PTI members began shouting the phrase 'chor chor,' which translates to thieves, against Pakistan's current prime minister. The video shows how during the arrival of the PM Shahbaz in the Masjid An Nabawi, some members that supported the PTI were had surrounded the PM trying to get close to him, but the PM was protected by a circle of soldiers that were escorting him and his delegation.

Multiple videos have surfaced the social media that further show the violation of the sanctity of Masjid Al Nabawi, which are all available on YouTube. These have raised questions for those that performed this act. On the 29th Saad Rafique stated in an interview that he doesn’t understand why those members didn’t have any shame while conducting this activity. This incident has enraged several Pakistani authorities, who are adamant that a full inquiry would be conducted in Pakistan and Saudi Arabia, with the perpetrators facing severe punishment.

Mariam Nawaz told us in an interview that ‘with great plans come great challenges’ and even quoted a hadith from Prophet Muhammad (PBUH) ‘do not raise your voices but keep them low’. Yet, this statement is like those made by other leaders of Pakistan. Nonetheless, in a recent statement made by the former prime minister Imran Khan, he has denied any allegations saying how ‘the value of Prophet Muhammad (PBUH) in his heart is indescribable and he doesn’t need to prove it’.

However, despite the ongoing feud between the different parties in Pakistan, the Saudi government has announced severe punishment for those involved in the Masjid An Nabawi incident. According to several reports from Geo News, just five people have been detained so far, despite the probability that this incident would be classified as an attack. This could mean that more individuals can be arrested who could face up to 6 months in jail with having to compensate 1 lakh Saudi riyal (100,00), which is £21,201.60.