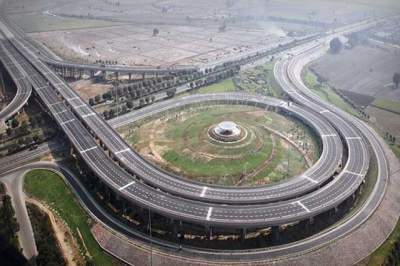 The construction of the world’s largest highway is on its way according to Nitin Gadkari. Nitin Gadkari, Minister of road transport and highways of India said that the government is constructing the world’s largest expressway- the Delhi-Mumbai highway. He also informed that the Delhi-Mumbai expressway project will get over by March 2022. After inspecting the Bharuch section of the Delhi-Mumbai expressway he made a recent announcement as the Narmada steel bridge was built in a time period of 32 months. The length of the highway will be 1,380 km and will go up to Jawaharlal Nehru port trust (JNPT), but now they are planning to the extent it up to Nariman point.

The 1380 kilometres long highway is being developed at a cost of Rs. 98,000 crores. The highway is beneficial for urban centres of Delhi too as it connects through the Delhi-Faridabad-Sohna section of the corridor along with a spur to Jewar airport and Jawaharlal Nehru port to Mumbai through a spur in Mumbai. At first, it took around 48 hours to cover the distance between Mumbai and Delhi by truck and approximately 26 hours by car. But now, we can cover the distance between Delhi to Mumbai by truck in just 18-20 hours and it will take around 13-14 hours by car, informed by Nitin Gadkari.

The highway will be the first expressway in India to have helipads and fully equipped health and trauma centres to give treatment for accident victims every 100 kilometres. It will have Wayside amenities at approximately 93 places with the facilities such as hotels, food zones, charging stations, ATMs, shops, and fuel stations.

The expressway is being developed as an eco-friendly expressway with a coverage of 2 million trees, watered with a drip irrigation facility along with a rainwater harvesting system at every 500 meters. The Delhi-Mumbai highway will be directly associated with other highways like Delhi-Noida Direct Flyway (DND Flyway), Kundli-Manesar-Palwal Expressway (KMP) in Haryana, Ahmedabad-Vadodara in Gujarat, Mumbai-Nagpur Expressway, Mumbai-Pune Expressway in Maharashtra.

Speaking at an interview, he said, “This highway is crossing from the tribal districts of Gujarat, Madhya Pradesh, and Rajasthan, this will be developmental for the areas and create many employment opportunities for the people of our nation.”

The Delhi-Mumbai Expressway is being constructed as part of the first phase of the ‘Bharatmala Pariyojana’, which will get toll revenues worth at least Rs.1,000-1,500 crores every month. To expand the country’s road and transport infrastructure, Nitin Gadkari declared that the National Highways Authority of India (NHAI) will tale in annual income pf Rs.1.40 lakh crore in the coming five years from the current level of amount worth Rs.40,000 crore.

Nitin Gadkari, who just accomplished a whirlwind tour to assess the progress of the Delhi-Mumbai Highway that will transit four states apart from the national capital, and the national highways infrastructure is a world-class brilliant achievement. Further, he said in an interview that “Once the Delhi-Mumbai Expressway is completed and opened for the public, we will get at least Rs.1,000-1,500 crore as toll revenues every month.”

As the COVID-19 pandemic hits every sector, the economy of our country has been adversely impacted and now it's on the recovery path. Keeping this in mind he added, “When the economy is on a decline, ‘then economics tells us that there is a need to increase investments in infrastructure.”