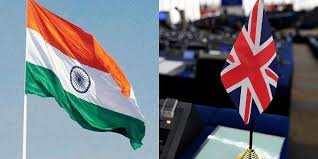 COVID has recently become a stumbling block in India-UK communication talks. The talks were called off at the last minute, although UK Prime Minister Boris Johnson recently visited India. The conversation covered a wide range of topics. It addressed issues such as trade, defence, climate change, and cyber security. The visit was actually quite brief and focused on the two nations' specific issues. Both countries focused on trade as complete FTA deadlines were extended till the end of October, near Deepawali, since it was time to revise the agreements in April. Mr. Johnson and Mr. Modi both said that bilateral trade might be doubled by 2030. Although there is no certainty about the trade delegation because these decisions have not been completed. Mr. Johnson's optimistic personality indicates a better future for India-UK trade agreements. India is also above its free trade agreements with the United Arab Emirates and Australia.

The Indo-Pacific region is highly politicised. Countries all across the world are considering expanding their ties with the Indo-Pacific area. The UK is also pursuing Indo-Pacific trade agreements with Australia and India. The UK gains many advantages by lifting tariffs on Indian whiskey and providing more flexibility in giving visas to Indian officials. India is also trying to lend by lowering tariffs on Australian wine.

Both Prime Ministers discussed the Indo-Pacific scenario from a different perspective, such as defence ties and cooperation. Climate change is a major issue at the international and bilateral levels. Green technology is becoming more popular in discussions around the world as the need for and concern about natural resources grows. Nations are contributing their services to the environment. The two Prime Ministers also gave it equal importance in bilateral talks, as well as climate financing, and India has not committed to the COP26 in writing, but India is always supportive of these perspectives.

The possibility of a third world war