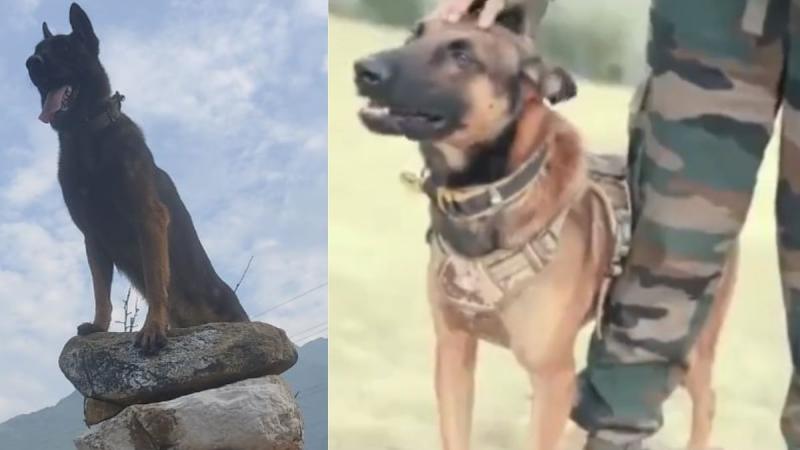 Often the brave soldiers of the Indian army are discussed, and how they fight against the enemies. But not only the soldiers of the military but also the dogs of the army are equally brave. For example, there is a lot of discussion on social media about a dog that clashed with terrorists in Jammu and Kashmir and continued to fight the terrorists even after he was shot. The name of this army dog is Zoom.

Zoom was a Belgian Malinois breed dog. Belgian Malinois are counted among strong dogs and are brilliant and fast-learning dogs. The unique thing about these dogs is that every dog ​​of this breed has a different nature.

Zoom was trained to detect terrorists and react quickly to them. He is considered a fierce dog that is involved in many army operations. Zoom, as usual, was assigned the mission to clear the house where the terrorists were hiding on Monday.

An operation was launched after security forces received indications of the presence of terrorists in the Tangpawa area of the South Kashmir district late Sunday night.

An Indian Army dog, Zoom, injured in a clash between security forces and terrorists in Anantnag district of Jammu and Kashmir on Monday, is in critical condition and is being treated under close observation by a medical team at the Army Veterinary Hospital in Srinagar.

Army officials reported on Wednesday that Zoom had undergone surgery and was in stable condition, but the next 24 to 48 hours were crucial. The officials also said that splinter injuries to his face were treated and that his fractured back leg was plastered.

According to army officials, "Army dog Zoom, under treatment at 54 AFVH (Advance Field Veterinary Hospital), died around 12 o'clock today." Zoom was generally reacting up until about 11:45 am when he abruptly started gasping and collapsed; they added

On Monday morning, Zoom was tasked, as usual, to check the house where the terrorists were hiding. Unfortunately, Zoom was hit by two gunshots during the operation and seriously injured. Nevertheless, zoom identified and attacked the terrorists, and the dog received two shots.

However, the officials said that Zoom continued to fight and fulfilled its task, killing two terrorists.

"Despite the severe injuries, the brave soldier continued his task, which led to the neutralization of Two Lashkar-e-Taiba terrorists killed in the skirmish, while many soldiers were injured.

The SC orders Centre to Frame Rules and Guidelines: Compensation for Covid Victims