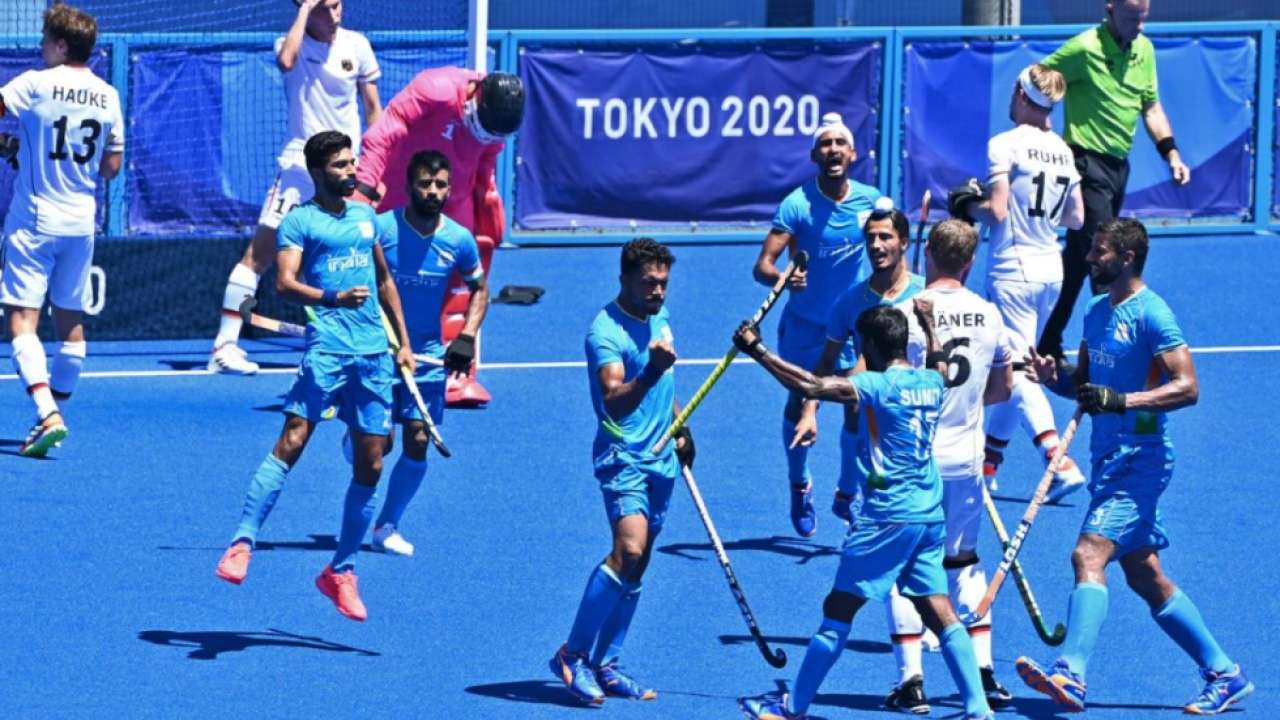 The Indian men’s hockey team beat Germany 5-4 at the Tokyo Olympics 2021 to secure a bronze for the country after 41 years.

On Thursday, social media was flooded with celebratory messages and congratulatory posts as India triumphed with flying colours in a nail-bitter playoff match against Germany. This epoch-making victory comes after longing since 1980 when India had won a gold at the Moscow Olympics with their exceptional performance. The latest success marks only India’s third hockey bronze medal in Olympic history. India had previously won in 1968 and 1972 at the Mexico City and Munich Olympics.

The tumble after the last gold was revived with flying colours as the Thursday match had the audience on the edge of their seats. India had to not only overtake Germany two times to balance the scores but also struggle to lead the match, finally achieving the feat.

Only after two minutes into the match, Germany took on the lead position after a score by Timur Oruz. Even though Germany gave India a tough time during the first quarter, India managed to get into the game with Simranjeet Singh’s goal at the 17th minute. In the following quarter, Germany took quick advantage of the defensive mistakes as they scored an additional two goals within a span of two minutes. Our team was quick to catch up; the two penalty corners: Hardik Singh and Harmanpreet Singh leveled the game for India. The thrilling match had everybody anticipating the next move due to the 3-3 score during halftime.

However, the Indian team overturned the situation on their side in the third half itself. Rupinder Pal Singh position the trajectory towards imminent success; it was quickly followed by a second goal, strengthening India’s hold over the match. The second goal saw Simranjeet Singh completing his brace at the 34th minute. Germany could not penetrate the strong defense of a determined team; ultimately, India clinched a prominent conquest.

The proud hockey team re-scripted history amid the nation rooting for the Indian participants at the Tokyo Olympics 2021. India has so far claimed five medals at the ongoing mega-sporting event -- a silver by Mirabai Channu in the 48-kg weightlifting championship, a bronze secured by boxer Lovlina Borgohain in the women’s welterweight category, PV Sindhu’s bronze in women’s badminton singles, and the fourth win by the men’s hockey team.

The long emotional journey for the Indian men’s hockey team finally ended and the who’s who of the country were quick to applaud the achievement in the sport. President Ramnath Kovind put out an early tweet, “Congratulations to our men's hockey team for winning an Olympic Medal in hockey after 41 years. The team showed exceptional skills, resilience & determination to win. This historic victory will start a new era in hockey and will inspire the youth to take up and excel in the sport.”

Gautam Gambhir referred to the medal as “bigger than any World Cup”. Even actor Shah Rukh Khan joined the bandwagon of appraisal by tweeting, “Wow!! Indian Men’s Hockey Team, Congratulations. Resilience and skill at its peak! What an exciting match!”

Notwithstanding, it was not only the big enchiladas who commemorated the occasion. The common public showered the team with praises and wishes. One of the congratulatory tweets read, “What a great result for the Indian hockey men. An Olympic Medal after 41 Years. Congratulations to the team, the staff, and hockey India.”

The latest medal has been proclaimed by wrestler Ravi Dahiya, who competed in the finals against Russia’s Zavur Uguev. Despite putting up a tough fight, the Russian opponent did just enough to sweep the match by 7-4. India is awaiting another medal as the women’s hockey team is to compete in a bronze medal match on Friday.