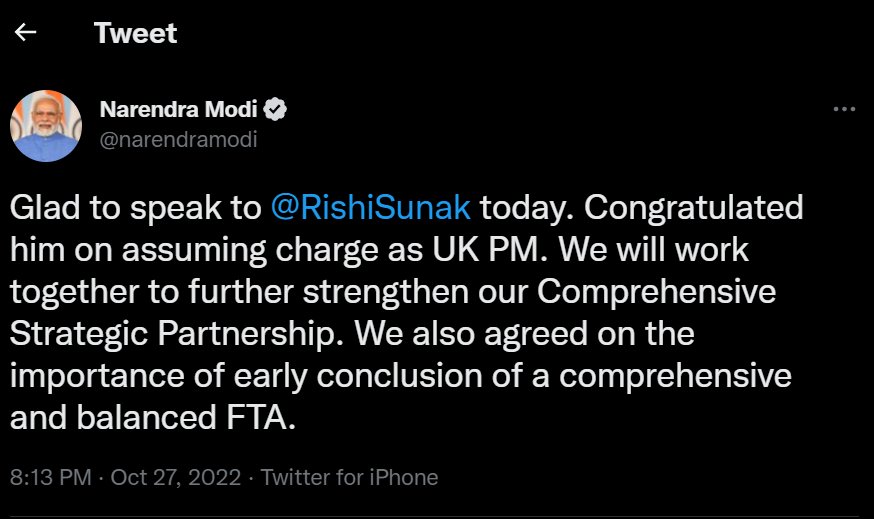 Prime Minister Narendra Modi and British Prime Minister Rishi Sunak announced their commitment to completing the long-stalled free trade agreement between India and the UK. The two leaders discussed the timeline over a phone call on Friday for finishing the deal and agreed that they would proceed with urgency.

Although the agreement was expected to be completed by Diwali this year, it is delayed because of the resignation of Liz Truss. The FTA aims to double bilateral trade to about $100 billion by 2030 and will cover 90% of the tariffs between both countries. Currently, 70% of trade is dominated by services, but this is expected to change as India becomes an influential player in the global market.

This show of unified commitment came in light of the UK's Secretary of State for International Trade Greg Hands addressing this issue in the House of Commons on Wednesday. He said that negotiations would begin soon and there were plans for another round of talks over the deal in October or November.

He further emphasized that a strong UK-India FTA will boost UK's economy by over £3 billion by 2035, while also cutting through the red-tapism and making it feasible for UK companies to access the ever-expanding Indian middle-class market.  As part of the negotiations, 16 out of the total 26 policy areas for negotiations have already been dealt with. He mentioned discussions will continue for resolving key areas such as the tariffs on British whiskey, promotion of SMEs, IPR, etc.

The newly elected Prime Minister Mr. Sunak had previously expressed his support for the FTA in July while he was Chancellor of the Exchequer. In a statement, he maintained, “I’m very supportive of India playing an increasingly influential role in the region, and indeed, in the world as a massive economy and the world's largest democracy and an FTA would prove a greater champion of that cause. Financial service is an area where there's an enormous opportunity for both of our countries. India's goal is to spread insurance across the entire economy because insurance is a great thing for enabling protection for individuals and growth. We can help with that in the U.K. because we have a fantastic insurance industry.”

These positive developments have also helped to calm down Indian apprehensions around this deal after Home Secretary Suella Braverman’s recent controversial statements on Indians as the largest group of visa overstayers.

However, though Mr. Sunak’s previous support for the deal should increase goodwill for both parties, the current political climate in Britain will also affect the coming round of negotiations. With Britain in economic disarray, and Miss Braverman retained as a key member of the cabinet, easing the flow of Indian migrants and businesses in the U.K might not be readily accepted by the British side. The FTA would prove to be a double-edged sword for Mr. Sunak. Although it shows how Brexit has allowed the U.K to have independent, profitable, and long-term trade deals with countries like India, it also enables the continued flow of migrants from the outside world, something which Brexit intended to put a hold on.

The coming weeks and months are going to be crucial in deciding in which way the much-anticipated India-U. K FTA is headed.