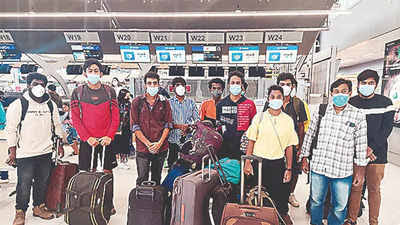 The Indian government claims to have rescued 130 Indians who were misled by agents who offered lucrative but fictitious job prospects in the information technology sector and compelled them to labor in Myanmar, Laos, and Cambodia.

The Ministry of External Affairs' spokeswoman, Arindam Bagchi, claimed on Friday that the freed Indian workers had been imprisoned and coerced into committing cybercrime for businesses involved in digital fraud and fake cryptocurrency.

The Ministry of External Affairs (MEA) warned Indian youngsters, cautioning them against accepting a fraudulent job offer from a global scam that offers employment in Thailand's information technology sector in exchange for sending unwitting applicants illegally to Myanmar.

The MEA had already confirmed that 60 Indian people had been held hostage in Myawaddy, Myanmar, without authorization. It should emphasize that neither the Junta nor the Myanmar Government governs the Myawaddy region of Myanmar.

130 Indian laborers from Myanmar, Laos, and Cambodia were saved, according to MEA spokeswoman Arindam Bagchi. In a letter sent to Prime Minister Narendra Modi last month, MK Stalin, the head elected official of Tamil Nadu, a state in southern India, said that 300 Indians, including roughly 50 Tamils from the state, were being kept captive in Myanmar.

Similar frauds have caused harm to residents of other countries in the area, including Cambodia; an investigation by Al Jazeera held in July discovered an intricate web of businesses that lured people into slave-like conditions to work in internet scams.

According to Arindam Bagchi, several shady IT firms seem to be involved in cryptocurrency fraud and digital scamming. He told reporters that the Indian employees had been held captive and coerced into committing cybercrime.

According to Bagchi, numerous workers were transported illegally across the border into a region of Myanmar that is hard to reach due to the local security situation. The scam networks, which frequently have ties to international organized crime, are claimed to be

However, if the workers are unsuccessful in tricking victims reached by phone into moving money into foreign bank accounts, they will then face isolation and the danger of violence.