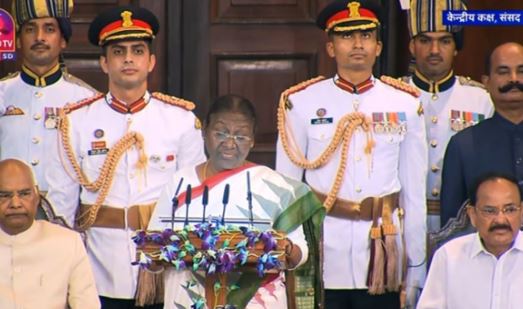 India as an independent nation has experienced a tumultuous history and enjoyed its glorious ups and shattering lows. But July 25’ 2022 marks one of India’s another glorious moments as after almost 75 years of cutthroat competition, the tribal community finally make their mark on the history of this country.  Smt. Draupadi Murmu, member of the Bhartiya Janta Party, has taken over as the president of the country after a successful reigning period of former president Mr.Ram Nath Kovind. She is the 15thand the 2nd woman president in office, that this country has seen.

Draupadi Murmu, prior to joining BJP and being elected the latest president of India, she was employed as the junior assistant in the irrigation department of Odisha government from 1979-1983 and later taught at the Aurobindo Integral Education Centre. She began her political career substantially, when she became the councillor of Rairangpur Nagar Panchayat, 1997. After that her career only sky rocketed as she reached numerous other heights like becoming a member of Vidhan Sabha (2000-2009), 9th Governor of Jharkhand (2015-2021) and then competing for the presidency elections.

The swearing-in ceremony began at 10:15 am on Monday July 25’2022, in the Central Hall of the Parliamentary House where the Chief Justice of India, NV Ramana provided the to-be President Draupadi Murmu with the oath. The ceremony went on with the following 21 gun salute and ended with her addressal as the latest president. There was a schedule designed specifically to maintain the accuracy of the ceremony. For the same, president elect, at the moment, was prepared to leave her residence at 8:15 am and reach Rashtrapati Bhawan at 9:22 am while paying a tribute to Mahatama Gandhi on Raj Ghat at 8:30 am, before reaching the Rashtrapati Bhawan. On her journey from the Rashtrapati Bhawan to the Parliament, Murmu was accompanied by the former president Kovind.

After the completion of oath ceremony administered by the Chief Justice Ramana, President Murmu was given a 21 Gun salute in her honour and addressed the audience gathered for this occasion. The gathering included Vice-President and Chairman of the Rajya Sabha M Venkaiah Naidu, Prime Minister Narendra Modi, CJI Ramana, Lok Sabha Speaker Om Birla, members of the Council of Ministers, Governors, Chief Ministers, heads of diplomatic missions, Members of Parliament and principal civil and military officers of the government.

In her addressal to the gathering, president Murmu stated that she is the first president born after independence. She continued with, this is not only my achievement. It is the achievement of all the poor in the country. The poor can dare to dream now. With their blessings and the support of the mothers and daughters of the country I am standing here in front of you now.

She also added that primary education was her focus and appealed to the youth of the country to come forward in laying the foundation of the nation and that they have her full support as the president. This historic moment received applaud and support from the current Prime Minister Narendra Modi as he stated that president Murmu winning the elections and taking over is a watershed moment for the marginalized and downtrodden community of the country and that he wishes her the best for her presidential period, according to the NDTV report.

President Murmu bagged votes from a total of 2824 electors, including 540 MPs, while her rival Sinha got votes of 1,877 electors including 208 MPs in the election. There were a total of 4809 electors, including 776 MP with total vote value of 10,72,377, but votes of 53 electors including the maximum of 15 MPs were declared invalid in the election held on July 18’2022. She rewrote history as the youngest president at the age of 64.