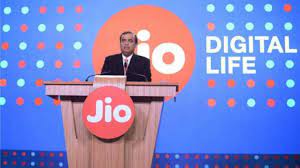 Recently Mukesh Ambani released many products at the Reliance Industries' 44th Annual General Meeting (AGM). JioPhone Next is one of the products that they have launched. This new smartphone will come with Android and have Google Play store access along with its features including voice assistant, automatic read-aloud of screen text, and language translation. This has been developed as a collaboration with Google and was announced in 2020 itself.

Earlier with the JioSet Models, The JioPhone Next is designed for people looking to upgrade from 2G to 4G connectivity fostering a reasonable price.  Mukesh Ambani described this smartphone to promote a developing next-generation with feature-laden amenities but extremely affordable. Set to be launched on September 10, the price of the smartphone has not been revealed yet.

Next up the giant telecommunications company is also looking forward to inaugurating the first next-generation network in India. With the advent of 5-G Networking in India, A Test Network was already demonstrated where positive returns were recorded. Reportedly it was found that data speeds above 1 Gigabyte Per second were delivered. With regulatory approval been given, they are set to test this on a wider scale with the field trials site.

Jio is on the brink of achieving success and also believes that it will be the first Indian carrier to make a 5G network accessible to consumers. The Network Digital Experts team has also claimed that its current 4G network would upgrade easily to the 5G mode without severe complications.

What’s even more surprising is the company’s vision for 5G which goes beyond phones too. It is said to have been developing a 5G-connected ambulance that will discover the effects by enabling “telemedicine”. Telemedicine would enhance doctors to get a live remote feed and being able to consult and direct the team of the ambulance. They are also working on the 5G Network in the education sector by enabling interactive AR/VR experiences for students to help them better in their lessons through a practical approach.

Perhaps the biggest Innovative idea that Jio seems to have worked upon is the Jio Institute. This educational institution is said to commence operations at its new campus in Navi Mumbai. Despite the Covid -19 Pandemic, Nita Ambani feels optimistic about the start of its operations. The Jio Institute is said to have been a dream project for the company with the vision launched a few years back.

This institute has been envisioned to be one of the best academic institutions with a well-developed infrastructure and a world-class platform for research and innovation. The Institute set under Reliance Foundation was awarded the Institute of Eminence Status by the Universal Grants Commission along with the Ministry of Education, Government of India under the Greenfield category devised for new or proposed institutions.

The Institute is said to have invited global scholars and researchers besides getting a pool of widely talented Faculty staff. The 1st proposed Courses are said to be Bachelor's degrees in data science, Artificial Intelligence (AI), digital media, and integrated marketing communication. While these have been targeted for Undergraduate students, The Reliance foundation aims to come up with foundation scholarships in AI and Computer Sciences for Post Graduate Students.

With many technological innovations and its ideas shared, one such announcement went unnoticed by many. It was in a way said to be the environmental equivalent of the launch of Jio—essentially the democratization of India’s energy forum in the days ahead and with a major vision going forward to transform it into a world leader in sustainable energy. The Jio Green Vision Project aims to develop solar energy as a major source. It visions the bypassing of the existing centralized station-grid model.

This project also allows easy adapting to both large solar fields that distribute energy through grids, but also as stand-alone units that would benefit more largely. Traditionally, in India, solar energy has been the backbone of electrification in Rural Areas, where the high costs were compensated by an opportunity Cost. Reliance’s main proposals are to create massive economies of scale to significantly reduce these costs. There were also major announcements of new and affordable high-capacity storage batteries along with this same vision.