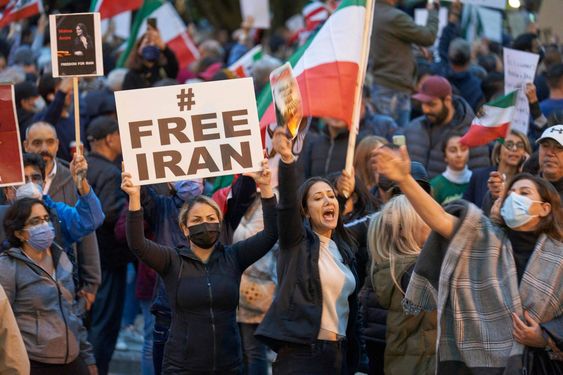 Doctors and nurses are treating demonstrators from anti-regime protests in secret to avoid arrest. This began once they noticed that women often arrived with different injuries than men, who were usually injured in the legs, buttocks, and back, according to The Guardian.

A lot of information regarding the bloody crackdown on protesters has not been made public due to the internet blackout, but photos provided by doctors to The Guardian showed wounds all over the women's bodies caused by bird-shooting slingshots, which security forces have fired at people from a short distance. Some of the photos show people with dozens of small “shot” balls sunk deep into their flesh.

10 medical professionals were interviewed, and they warned the press of the severity of the injuries which could leave hundreds of young Iranians with permanent scars. In Iran, these are common shootings in the eyes of women, men, and children.

A doctor in the central province of Isfahan said he believes the authorities target men and women in different ways "because they want to destroy the beauty of these women".

"I treated a woman in her early 20s, who was shot in her genitals by two pellets. Ten other pellets were lodged in her inner thigh. These 10 pellets were easily removed, but those two pellets were a challenge because they were wedged in between her urethra and vaginal opening," the physician said. "There was a serious risk of vaginal infection, so I asked her to go to a trusted gynecologist. She said she was protesting when a group of about 10 security agents circled and shot her in her genitals and thighs."

A doctor in Karaj notes that security forces, "shoot at women's faces and private parts because they have an inferiority complex. And they want to get rid of their sexual complexes by hurting these young women".

Iran's Ministry of Foreign Affairs was contacted for comment on the allegations made by the doctors but did not receive a response. Also, all of the doctors, nurses, and victims interviewed have spoken on condition of anonymity for fear of reprisals.

From the beginning of the anti-regime protests….

The death of a 22-year-old young woman, Mahsa Amini, in September, triggered the biggest challenge to the harsh theocratic rule of the country's clerics.

Amini was arrested for improperly wearing the veil and then beaten into a coma by Iran's moral police. In the days following her death, girls and women across the country defied the legal dress code and took off their hijabs.

After this movement, aggression towards the protestors began, and doctors say "Women are so ashamed to go to the hospital that many are treated at home, and this is very dangerous”, and for this reason on October 26, hundreds of doctors protested in front of Iran's medical council and were shot in the back and legs with stun guns by security forces. They shoot blindly at all those who are not on their side.

Since the death of Mahsa Amini in custody, which took place in September, protests emerged all across Iran. Between 16th September and 2 December, 1641 protests have been recorded in various cities.