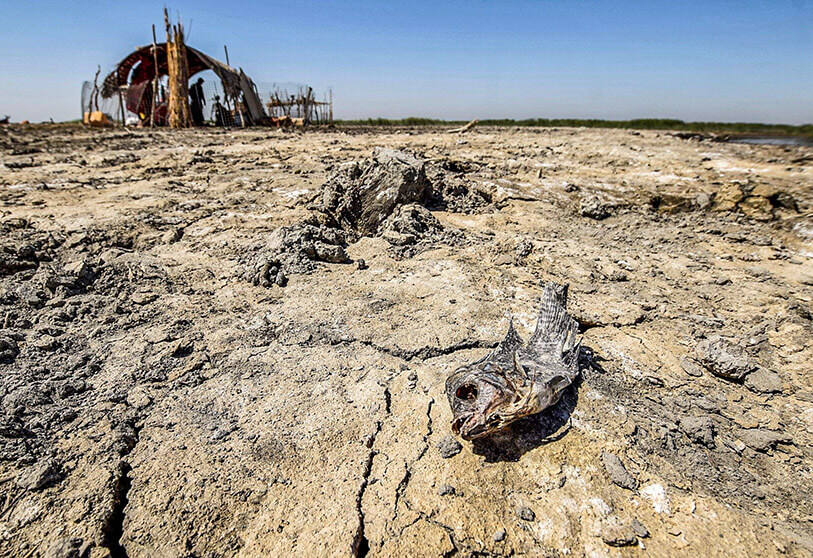 Desiccated body of a dead fish in the Chibayesh marsh in the Ahwar area of southern Iraq. Source: AFP/ASAAD NIAZI.

On Saturday, Iraq invited Turkey to enhance the release of water along the Euphrates and Tigris. This is deemed necessary to help counter the ongoing droughts that are severely hitting the country.

The issue is compounded by the fact that Iraq is a downstream country dependent on Turkey and Iran for their water management policies, particularly concerning the problem of dam construction.

The main issue is Turkey's reliance on the reservoir located behind the Ilisu Dam near the Iraqi border, which is regularly filled with water from the Tigris River.

Despite Ankara's declarations reassuring the water flow is kept at the same level, Baghdad's main request is to reduce water storage to let more water into the southern province of Basra and impede the construction of further dams both in Turkey and Iran.

The issue of water management concerning the two major rivers, the Tigris and the Euphrates, is an old one.

The two rivers originate in Turkey, and their basins are shared by Iraq, Syria, and Iran. Generally, Turkey provides 90% of the Euphrates and Syria 10%, while concerning the Tigris, Turkey, Iraq, and Iran contribute 40%, 51%, and 9%, respectively.

While until the 1960s relations between these states concerning the two rivers' water management were peaceful, problems started from the 1960s onwards due to several factors.

Firstly, the development of large-scale water projects in each riparian state without any sort of coordination. This had a visible repercussion on the water flow, especially for downstream countries.

A sudden population increase led to more water demand. This, in turn, led countries like Turkey to promote more water projects aimed at generating more power and reducing their reliance on oil imports.

In 1975, for instance, due to prolonged droughts, Turkey and Syria decided to employ the Kebanm and Taqba dams. The simultaneous use of these two dams brought the two neighbors to the verge of war, prevented by the timely intervention of Saudi Arabia.

Political reasons were also involved, whereby water was used mainly by Turkey as an instrument to exert pressure on its neighbors. For Syria, for example, ceasing support for the PKK was a precondition for receiving more water from Turkey. In 1990, after Iraq invaded Kuwait, Turkey decided to cut the water flow.

Internal political problems were also responsible for the drought problem in Iraq. In the 1990s Saddam Hussein deliberately drained the marshes in southern Iraq as a form of retaliation against the local Shi'ite tribes who had opposed him after the first Gulf War.

This created problems for herders of water buffalo as they were deprived of their main source of livelihood. Despite the marshes being reflooded in 2003, many herders opted to emigrate to other regions.

More recently, the marshlands of the Al-Chibayish district of Dhi Qar have been subjected to more droughts. This time, the Islamic State was responsible for disrupting water flow by controlling several dams located along the Euphrates River in the north.

All of these factors, combined with record low rainfall due to climate change, as well as Iraq's position as a downstream country, are having an impact on the social and economic situation.

Many people living in the affected regions are heavily reliant on water as their main source of livelihood is agriculture and herding. Many are forced to relocate, especially in big cities.

The case of Khamis Ahmad Abbas from the Plains of Nineveh, northeast of Mosul, is representative of the ongoing situation. The father of nine children, he was recently led to unemployment as the extremely hot temperatures dried his fields. “Growing wheat and barley is a gamble. It all depends on the rain”.

The International Organization for Migration (IOM) reports that between June and July of this year, 447 people who had previously been driven from their property in Nineveh by IS and then returned after the jihadists' defeat were once more forced to leave due to the drought.

Recently, cooperation between Turkey and Iraq on water management has been boosted. According to an Iraqi statement, Mehdi al-Hamdani, the minister of water, and Veysel Eroglu, the president of Turkey's special envoy for Iraq, spoke about "quantities of water arriving in Iraq through the Tigris and Euphrates" from Turkey.

Hamadani asked Turkey to reconsider the amount of water released by Turkey to let the country recover from the severe droughts.

On the other hand, Turkey is accusing the country, through its Ambassador to Iraq, Ali Riza Güney, of dissipating water. The ambassador said that Iraqis were “squandering” water resources and that they should work toward better management combined with the modernization of the irrigation system.

Although environmental causes are the main culprits for the situation, some blame Turkey for controlling the water flow by cutting off the Tigris and Euphrates.

This is what Iraq's Minister of Water Resources, Mahdi Rashid Hamdani, stated in 2021. According to him, water from Turkey through the two main rivers had decreased by 50%.

Iran is not less culpable. The country is responsible for draining several rivers in Iraq like the Kanjan Jam, Kalal Badra, Jankilat, and the Karkh. This produced considerable internal migration flows, causing profound changes in the biological and environmental systems of the area.