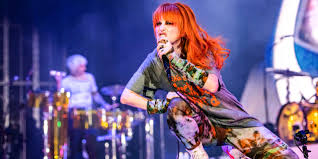 The emo scene has long held a large following even as other genres later took over in the mainstream after the 2000s. But recently, some of the most prominent faces in the scene have returned with new work.

Last year Sleeping With Sirens released their seventh studio album, “Complete Collapse.” Pierce the Veil and Paramore also came back to the. The scene, releasing singles off their upcoming albums, is set to release on February 10th. The most significant acts of the scene that have come back to bring new music are My Chemical Romance and Fall Out Boy.

After weeks of teasing, from taking an ad out in a Chicago paper to leaving mystery website links on the backs of postcards, Fall Out Boy dropped a single off their upcoming album, “So Much (for) Stardust,” out March 24th. And as for My Chemical Romance, before kicking off their reunion tour, the band surprised fans by releasing “The Foundations of Decay,” their first single since “Fake Your Death.” The band also has kept the internet busy by circulating rumors of booked studio time.

With so many notable bands returning to the scene at once, it begs the question of if we are entering a new wave of emo music. The first wave came straight out of the 80’s punk scene, maintaining the sound while becoming more emotional in lyrics. Rites of Spring and Embrace were two bands that helped kick the genre off. Midwest emo came out during the second wave, toning down the rawness of the first. During both waves, the genre itself had become tossed aside and rejected, especially by the bands that the label stuck to.

Emo got its rise in popularity once the 2000s hit, though, with bands like Taking Back Sunday and defined a new space for teens. And as it faded back as other genres took over, the fourth wave came bringing in bands like Mom Jeans and Remo Drive. The fourth wave has carried over some time, but with many of the foundational bands returning, it may be possible to see a fifth wave of emo music coming.

This time the scene with the music is being crafted in a time that is more accepting of its’ crowds and is experimental with its sound, as shown thus far with the newer music dropped. Only as more artists continue to create and contemporary artists rush in with original sound can it become defined. The one certainty is that emo music is becoming popular again amongst crowds.