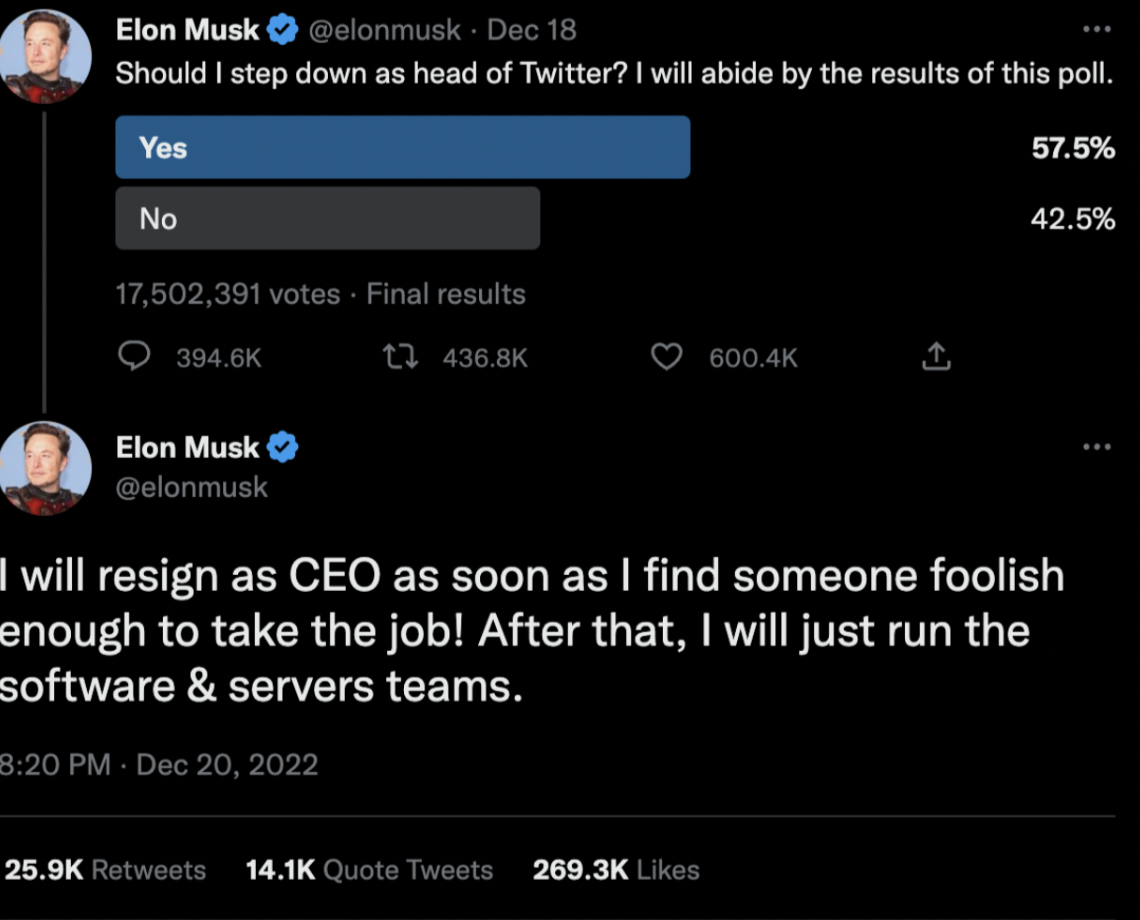 Sunday night, December 18, 2022, Elon Musk tweeted a poll deciding whether or not he “Should step down as head of Twitter.” Replying to the tweet two days later he wrote “I will resign as CEO as soon as I find someone foolish enough to take the job! After that, I will just run the software & servers teams.”

On October 28, Elon Musk, co-founder and leader of Tesla and SpaceX also the richest man in the world, completed the $44 billion purchase of all the shares of Twitter. Quickly after Musk fired half of the company’s 7,500 workers, including top executives, and content monitors (Trust and Safety Team). Adding on, he instated a new subscription policy, Twitter Blue. For $8 a month subscribers can be verified, meaning they receive a blue checkmark like celebrities’ pages. Following these decisions, Musk, a free-speech absolutist, edited Twitter’s old safety policies. This included unbanning certain accounts and unblocking certain words.

As a result, anti-semitism and racism exploded. Posts slamming Jews and repeating racist slurs were trending. Then, a series of fake accounts began impersonating celebrities, misreporting things they had said or done. These instances received backlash. All of which condemned Musk’s intervention with the platform.

Due to the public’s distaste for his ownership, Musk took to Twitter’s poll feature, similar to how he mitigated other disagreements with the public. For instance, users were amid for Musk to suspend former President Donald Trump’s account, due to claims of his inciting January 6. Musk took to the polls, in which the majority voted for Trump to be banned, and Musk agreed “the voice of the people is the voice of God.”

So, now that 57.5% of respondents have said “yes” to Musk stepping down it would seem he would abide by the final results, as he did for previous polls. Yet, 12 hours after the poll, Musk suggested he will alter respondents to those with a Twitter Blue subscription. It is unknown if or how he could do so since he has repeatedly said he would follow the poll’s results. Either way, it is clear the public is unhappy with his current ownership of Twitter.