Is Poseidon, The Doomsday Weapon, Ready? 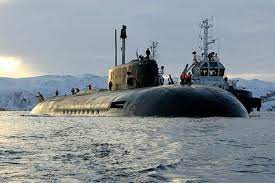 The eyes of the world - even the satellite ones - are now watching the Arctic Sea. A new, devastating nuclear weapon could soon be tested there by the Russian army.

Poseidon was one of the Twelve Olympians in ancient Greek mythology: the god of the sea, earthquakes, and horses. Now, Poseidon stands for a devastating nuclear weapon, part of the Russian nuclear arsenal, capable of creating a giant radioactive wave with the destructive power of an angry God from thousands of years ago.

Vladimir Putin, the Russian president, has threatened other nations with his menacing statements about Russia’s possession of nuclear weapons. It remains unclear if these statements are only a deterrent or a proper warning of what could happen. Regardless, they are raising tension in Europe.

Another high alert came after the US and NATO forces could not find the K-329 Belgorod, the Russian nuclear submarine carrying Poseidon's bomb, in its Arctic base.

The K-329 Belgorod is the newest submarine of the Russian navy, considered the first Russian fifth-generation submarine. It is the largest submarine ever produced since the Typhoon class, has a nuclear engine, and is capable of being submerged for 120 days.

Developed primarily for research purposes and underwater operations, it can act as a mother submarine (host platform) carrying sophisticated deep-diving midget drones. Above all, its most dangerous characteristic is the capability to carry and launch up to six Status-6 (Poseidon), considered the ‘doomsday’ weapon.

The Status-6 oceanic multi-purpose system, first revealed in 2015, is a remotely operated drone in a shape of a torpedo. It is capable of being stealthy thanks to its unique nuclear-powered propulsion system. It can have a range of 10,000 kilometers and reach speeds up to 100 kilometers per hour, which make it undetectable and essentially unstoppable. It can sit on a seabed, then be remotely activated and controlled, becoming even more difficult to counter by missile defense systems.

Poseidon provides nuclear warheads with an estimated power of 100 Megatons (the Tsar bomb, the most powerful nuclear weapon ever tested, was 50 Megatons). Such devastating power underwater is allegedly enough to generate a 500 meters high tsunami, enough to submerge many seaside cities.

Besides the destruction brought by the tsunami, Poseidon is a cobalt bomb that unleashes a higher quantity of radiation compared to any nuclear weapons used before.  The radioactive fallout would make the affected areas inhabitable for decades, poisoning air and soil.

Belgorod leaving its Severodvinsk base heightened the alert status of the entire world, moved by the fear of this devastating weapon. It has been spotted recently in the Barents Sea on the surface.

These maneuvers are ordinary during testing for newly built submarines, but the US and NATO forces remain concerned due to the turbulence of the times and Russia’s behavior.

Overall, Poseidon testing is not out of the question: Belgorod appears to be moving toward the Kara Sea, where NATO analysts suppose a test can realistically happen. Such a move can be a simple trial for a new weapon - or another step toward Russia's chosen nuclear escalation.