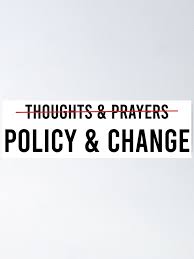 After the mass shooting which took place at an elementary school in Uvalde, Texas, America once again finds itself heartbroken. President Joe Biden, along with other politicians such as Ted Cruz, Senator Mitch McConnell, and Madison Cawthorn, took to social media with messages of prayer. With comments under these posts such as “Prayers aren’t working, Teddy. For once, do something for the people.” Along with “Faith without WORK is DEAD Ted!!!! Go DO SOMETHING”, it is clear many Americans are outraged once again over the lack of gun control. In 2022 alone, there have been a total of 213 mass shootings in the United States. With over 600 children and teenagers killed along with another 1,500 injured, many citizens believe it is time to take control over guns.

On the night of May 24th, Senator Chris Murphy, a strong advocate for gun control, stood on the Senate floor begging for politics to be put aside and change to be made. Murphy states, “Why are we here if not to try and make sure fewer schools and fewer communities go through what Sandy Hook has gone through, what Uvalde is going through… I am here on this floor to beg, to literally get down on my hands and knees and beg my colleagues: Find a path forward here. Work with us to find a way to pass laws that make this less likely.” With Democrats and Republicans unable to agree on gun laws, frustration remains about fear of not only when, but where an attack may take place next.

After the racially motivated shooting which took place on May 14, 2022, in Buffalo, New York, Democrats swayed their focus from voting on stricter background checks to a domestic terrorism bill which The House passed last Wednesday and will receive a vote on Thursday. This bill will allow for federal agencies to not only analyze but track domestic terrorism along with white-supremacy groups. This bill passed legislation with full Democratic support. Yet, there is talk of the unlikelihood of it reaching the support of 10 Republicans needed to overcome a filibuster.

Senator Richard Blumenthal who was previously involved in crafting federal legislation regarding mass gun violence spoke out on the Texas tragedy. Referring to Sandy Hook  Blumenthal states, “I’m reliving the pain and grief that we felt in that parking lot as we saw parents who knew they would never again see a 5- or 6-year-old child and never again have that child to hug or kiss.” He follows: “I don’t know how you can see that happen and not feel, I have to do something.”

From the first mass murder on September 6, 1994 to our latest tragedy this week in Texas, there is still no solution to this problem America faces. As politicians continue to scramble to come up with solutions in the midst of differing opinions on all sides, the question remains, “Is the act of prayer enough to stop American gun violence?”