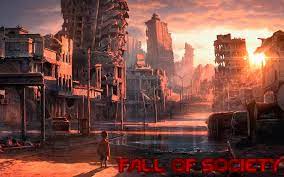 The Human Society today is an evolution of people and various identities that have so forth only expanded from the time it had started during the times of Homo Erectus and ever since the beginning of what we would call a societal framework. Over the years human society has advanced digitally, and we, as human beings have enhanced our social aspects, mitigated challenges together, and worked on the path to attain sustainable integrity.

Well with every aspect of these so forth in line, society is on the brink of a collapse, as a 1972 MIT study predicted. This is turning out to be a mere reality as studies have shown. The study initially predicted that rapid economic growth would be the main factor that would cause mayhem that would lead to this societal collapse by 2050. This study had been recently reviewed and advanced studies on this by current scholars have proven this true.

This brilliant new study led by a director at one of the largest accounting firms in the world had rediscovered this old study from MIT about the risk of industrial civilization collapsing that is based on original data in the current world. With the Covid -19 Pandemic having rampaged the economy, the world was on its way to recovering all these losses. Meanwhile, when this study from the research has begun to question every individual as a whole with the prospects of an attempt to return to the Post – Pandemic World.

The original study by this team of MIT Scientists got underway in the early months of 1972. They had been researching on a paper that had intended to be for theories of civilizational collapse with early societies. The model that they had published so-called the ‘System-dynamics model’ had identified the impending ‘limits to growth’ (LtG) that meant that industrial civilization was on track to disintegrate sometime within the 21st century, with the overexploitation of innate resources.

One of the Big 4 Firms, KPMG had published this on their website and the study concluded that the current business scenario of our civilization is on the path to an instant decline of economic growth that would lead to the collapse of Human society by 2050.

Gaya Herrington, serving as the Sustainability and Dynamic System Analysis Lead at KPMG, USA had performed this research during her master thesis and had compared the World model with empirical data. With the last studies performed in 2014, the one recently has gotten hugely popular. The New Paper was analyzed by examining data across 10 key variables, namely population, fertility rates, mortality rates, industrial output, food production, services, non-renewable resources, persistent pollution, ecological warfare, and human footprint and this was further collated with aligning Two scenarios, ‘BAU2’ (business-as-usual) and ‘CT’ (comprehensive technology).

This collapse does not indicate that humanity will cease to exist but is a warning that economic and industrial growth as a whole would stop and face a terminal decline which would eventually affect the production of food and living standards of the society. Among the Two, The Comprehensive Technology scenario is said to be the least close fit to adhere to the path for a stabilized world. The civilization, in this case, would lead the route to sustainable development and will experience a marginal smaller decline in economic growth that would process a combination of technological ideation and greater investment in public health, education, and cleaner hygiene.

Both the Business as usual and Comprehensive technology scenarios show the end of an economic decline in 15-20 Years, the BAU2 Scenario shows a clear collapse whereas the CT scenario suggests the possibility of decline but it being relatively better and in intervals giving humanity a chance to reap their mistakes.

While both the studies indicate and align very closely with the data used, the windows for all opportunities are said to be open and it’s said that the technological progress and increased investments in public and social services could not just avoid the risk of collapse, but lead to a show a better path for a civilization that flourishes with prosperity and also has the best operation levels.

The route ahead is tough and we must also act accordingly so that we can help preserve the civilization ahead. While Human activities are regenerative and our productive capacities can be modified and later transformed, working towards these efforts can help us build a sustainable world. Just like how rapid development and procurement of vaccines at an unprecedented rate was done in response to the Covid Pandemic, we can also act on a constructive path to better the current circumstance. While these changes will take time and pose a lot of difficulties, a sustainable future is still possible.