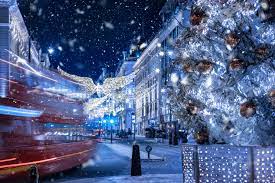 Winter is coming, and so is the snow over the holidays for the first time in a dozen years.

The United Kingdom doesn't usually experience shallow temperatures, as mainly warm seas surround it. These often keep the temperatures above zero degrees, making winters relatively friendly. That is also why the UK gets more rain, fog, and mist.

The perfect conditions for snow in the UK involve colder air, therefore, cold winds from the east or north sides. However, most often, the winds approaching the island come from a southwestern direction. These, unfortunately, aren't cold enough for snow to form.

Nevertheless, forecasters are predicting a rapid temperature change from next week, with a possibility of fallouts across the UK. Scotland could be awaiting its first precipitation sooner than anyone else, with around three centimeters expected.

Scientists are also hopeful about the weather around this year's Christmas season. Snow is said to fall on December 25, right before Christmas Day. This is the time to start getting excited for everyone missing snowy London and its holiday atmosphere.

With around 80 days left until Christmas, many quickly predict a long-awaited festive atmosphere's comeback. Since 2010, the UK hasn't seen much snow over the winter holidays. During that time, 83% of Met Offices have witnessed snow laying on the ground around Christmas. This was the highest amount of snow ever recorded during the said period.

Christmas 2022 is already being called a "white Christmas" all over. "White Christmas" indicates cold weather around December 25 and 26, with around one or two centimeters of snow covering most surfaces. Met Offices in London, Cardiff, Aberdeen, Manchester, and Belfast are responsible for pronouncing Christmas as "white" and providing a detailed analysis of weather conditions and snow whereabouts on said days.

UK citizens are being warned about an unusually chilly winter. An expert for British Weather Services, Jim Dale, asserts that "the seasons are about to make a dramatic transition to something much colder." Temperatures may drop to around minus eight degrees. This is all thanks to the "long La Nina" period, when the ocean surfaces cool down, inducing snow and colder weather.

Although meteorologists have claimed the weather should become colder around the first weekend of October, the temperatures are still relatively stable. As of the first week of October, it varies between eight degrees in some areas of Scotland and 16 degrees in London.

Even though the Met is hopeful for a snowy December, their forecasts aren't fulfilled so far. Not to mention climate change, which increases average temperatures, reducing the chances of a miraculously snowy Christmas.

Snow or no snow, energy bills are set to skyrocket this winter, regardless. Many predict a gas supply emergency and a cost of living crisis in the UK. Ofgem warns that "due to the war in Ukraine and gas shortages in Europe," the United Kingdom is also at risk of facing problems in terms of heating this winter season.

What To Watch This Christmas: Some Suggestions