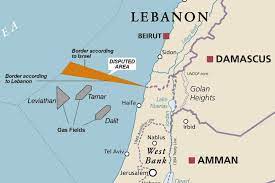 The disputed area between Lebanon and Israel. Image credit: Shutterstock.

Last week, Lebanon and Israel signed a historic agreement to regulate the delimitation of their territorial waters and maritime borders. This US-mediated deal will help both countries define the exploitation of gas fields in the area. The primary disputed areas were the Qana and Karish fields. Thanks to the agreement, Israel can boost natural gas extraction and exports.

More specifically, the agreement settles Lebanon’s claims over the Karish field, located in Israeli waters, on which, however, Lebanon demanded some rights in 2020. The Qana field, instead, lay in disputed waters. The agreement suggested a fair solution. Accordingly, Israel will be allowed to retain the Karish field and conduct its drilling activities there. The Qana field is assigned to Lebanon. Given that part of the Qana field extends slightly over a piece of sea belonging to Israel, as defined by the new maritime border, Lebanon will recompense Israel with a share of the field’s revenues.

One of the main rationales for settling the dispute between the two countries technically at war was the discovery of new gas fields offshore, whose exploitation would skyrocket the two countries' economies.

As reported by The Guardian, the Lebanese president, Michel Aoun, declared he was satisfied with the agreement but that several details still needed to be defined through further talks. He said the deal “satisfies Lebanon, meets its demands, and preserves its rights to its natural resources." The Israeli Prime Minister defined the meeting as historical since it will "strengthen Israel’s security, inject billions into Israel’s economy, and ensure the stability of our northern border." This declaration has a double implication.

Firstly, it settles a long-standing territorial border dispute that dates as far back as the very creation of the state of Israel. Nevertheless, the agreement should not be interpreted as a peace deal between the neighbors. Accordingly, the Shiite faction Hezbollah harshly criticized the talks, maintaining that only military personnel should be present during the discussions, not politicians and civilians. In this regard, the pro-Hezbollah Al-Akhbar stated that this deal would only benefit Israel and penalize Lebanon. The Hezbollah parliamentary alliance clarified that this discussion on the maritime dispute should not be called "reconciliation" or "normalization." The main point of contention for the Shiite faction is the Karish field, whose allocation to Israel is contested.

On these grounds, the deal should be interpreted as merely an economic one. Al-Jazeera reporter Zeina Khodr clarified that vital economic interests tie both countries. She said, "Both sides have been saying that these talks are not about peace, normalizing ties, or recognizing each other. But they are about a technical issue. Whether or not that is possible is another question. Both sides have commercial interests at stake. Lebanon more than Israel because Israel has already started to drill and explore its waters, but Lebanon has not.”

This makes sense as Lebanon’s economy is currently experiencing one of its worst phases. In 2021, the World Bank ranked the country’s economic and financial conditions among the top ten most catastrophic since the middle of the nineteenth century. In terms of numbers, GDP per capita fell by 37.1 percent in 2018, or about $55 billion, and it was expected to fall by another 30.5 percent by 2021. This situation is usually the outcome of a prolonged state of war. Therefore, this deal would undoubtedly, prove highly beneficial to Beirut’s dire economic conditions.

Second, by resolving this long-standing dispute, the agreement has the potential to turn Israel into an essential hub for gas supply to Europe. The ongoing war in Ukraine and the ensuing energy crisis have pushed the European Union in the past few months.

Israel has been active in gas exports to Egypt through an offshore facility since 2020. From there, the gas is liquified and exported to Europe. The recent trilateral memorandum of understanding signed by the EU, Israel, and Egypt on June 15 clearly shows Tel Aviv's enhanced exporting capabilities.

The Middle East Eye reports that Israel’s royalties have increased by 50 percent since the beginning of the war in Ukraine to meet Europe’s demand more efficiently. The main gas fields exploited are the Leviathan and the Tamar. The recent addition of the Karish field will undoubtedly support the Israeli government’s will to boost European gas exports. This represents a unique opportunity for the country, especially after the failure of the EastMed project. This concerned the construction of a new pipeline with the contributions of Israel, Cyprus, Greece, and Egypt. The project was dismissed due to environmental and economic concerns and the considerable distances the channel should have covered.

Notwithstanding the political opposition in Lebanon, the agreement will contribute to stability in the region. Greece and Turkey, trapped in the same maritime dispute for decades, will harmonize their tense relations. If they follow Lebanon and Israel’s example, the potential for this strategic, energy-wise region would be strengthened. This would contribute to containing the energy crisis in Europe, one of the main consequences of the ongoing war in Ukraine.