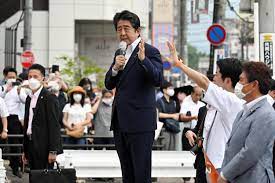 Former Japan Prime Minister Shinzo Abe was shot today in Nara during his campaign for the upcoming election. The 67-year-old ex-world leader is reportedly showing no vital signs after being rushed to the hospital. A suspect has been taken into custody.

Abe was making a campaign speech outside the Yamato Saidaiji Station in the city of Nara, in western Japan, when two shots rang out at about 11.30 am. Initial reports say he may have been injured but reporters on-site claimed to have heard something like a gunshot and then saw the ex-PM bleeding.

The incident occurred while Abe was making a campaign speech on a street outside the train station ahead of Sunday’s election to the upper house of Japan’s parliament. After the sounds of gunshots rang out, Abe's security personnel rushed to aid him while the suspect was tackled to the ground by police at Yamato after the attack.

Chief Cabinet Secretary Hirokazu Matsuno, addressed the media on Friday morning, saying that he is not aware of Abe’s current condition, condemning the shooting by saying that such an act of barbarity cannot be tolerated. Meanwhile, the Nara city fire department said that Abe was allegedly in cardiopulmonary arrest before he reached the hospital.

Two witnesses, a reporter and a female attendee, said that they heard two gunshots. The woman said that though the first gunshot was loud, she did not see anyone fall. But after the second shot, she saw ex-PM Abe fall to the ground.

The reporter on the site said that two consecutive bangs were heard during Abe’s speech and then Abe's security personnel were seen rushing to his side after he collapsed. The same can be seen in videos and pictures captured on the scene.

Abe was shot towards the left of his chest while multiple shots were being fired by the attacker. One appears to have hit the former PM in the neck.

The 41-year-old man, Tetsuya Yamagami, a resident of Nara City, has been arrested under attempted murder charges for shooting at Abe. He is reportedly an ex-military member, a former maritime self-defence force member.

A witness to the attack claimed that the apparent shooter did not attempt to escape after the shooting. He instead laid down the gun and remained prone on the spot as he was surrounded by security personnel.

Prime Minister Narendra Modi spoke about the shocking news, saying he was deeply distressed by the attack on his dear friend Abe Shinzo. He sent out thoughts and prayers for him, his family, and the people of Japan, he tweeted. Abe is currently receiving blood transfusions and all efforts are being made to save his life.

2023: Tricks And Traditions To Start The New Year With Luck