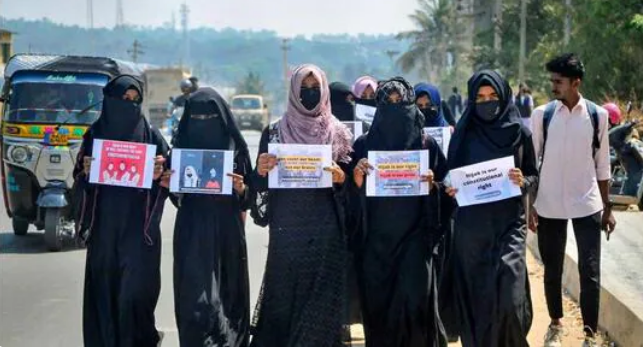 After Karnataka high court decided to uphold the ban on hijabs in educational institutions in the state, various responses have been flooding through. Various Muslim religious leaders in Karnataka have announced a strike against the verdict on March 17.

Protests are rising from Muslim students from Karnataka and other parts of the country. Following the verdict, several Muslim girl students began leaving their classrooms in protests and took to the streets with placards and slogans. Six Muslim girls students of the Government Pre-University Girls College in Udupi did not turn up for classes on Wednesday. Fifteen girls of Kamala Nehru College in Shivamogga returned home, marking their decision not to enter the campus after the verdict. A group of students from Jamal Mohammed College staged a demonstration on Wednesday against the verdict.

Among the "symbolic demonstrations", many Muslim traders from all over the state reportedly closed their shops, while several shops owned by non-Muslims have remained open. Merchants from Bhatkal town in Uttara Kannada district observed a bandh. On March 16, Burma Bazaar, Main Road, Madina Colony, and Navayat Colony in Bhatkal remained abandoned. Wearing a hijab is the religious right of the Muslims, and the verdict is against the secular fabric of the country and the Constitution, according to students who gathered near TVS Tollgate.

VHP’s Gujarat secretary, Ashok Raval, said, “The hijab is not allowed in the defense forces, police, and government offices, then why the insistence on hijab in schools and colleges?”. Instead, “It is an attempt to raise communal tensions” - he added. Rishi Trivedi, chairman of the Akhil Bharat Hindu Mahasabha group, replied: "We are a Hindu nation, and we do not want to see any kind of religious outfit in educational institutes of the country,” he further added that “We welcome the court verdict and want the same rule to be followed throughout the country.”

A day after the verdict, graffiti saying “Hijab is our Dignity” surfaced in a few government education institutions and public walls in Hospet, which is the district headquarters of Vijayanagara district. Four separate cases got registered in three police stations of the district, in connection with the incident, despite the removal of the graffiti by civic officials. The virtual world is also witnessing several protests. The hashtag #Hijab Verdict is trending on Twitter with more than 26,000 tweets.

Though the students have approached the Supreme Court to appeal the decision of the Karnataka high court, Chief Justice of India N.V. Ramana told advocate Sanjay Hegde that the court would consider listing the matter only after the Holi vacation, which will go on until March 21.