Kashmiri Leaders Reached For Discussion with PM Modi, Farooq said - Hope he will listen to us comfortably 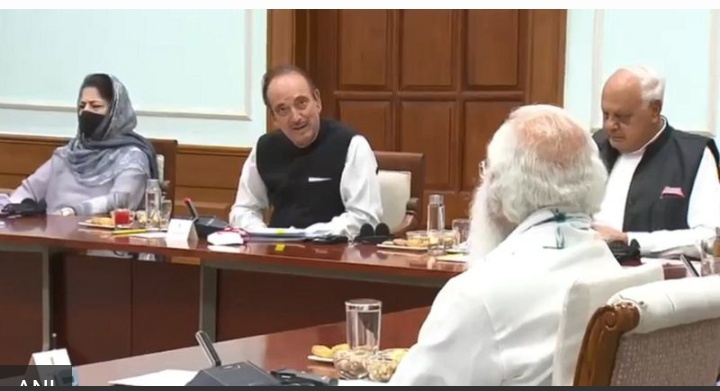 Prime Minister Narendra Modi is holding an all-party meeting with 14 leaders of Jammu and Kashmir in New Delhi on Thursday to discuss the Union Territory of Jammu and Kashmir. Along with various political parties of the country. Three former Chief Ministers of the Gupkar alliance of Jammu and Kashmir, Dr. Farooq Abdullah, Mehbooba Mufti, and Ghulam Nabi Azad are also involved in this meeting.

According to media reports, Union Minister Jitendra Singh will deliver the welcome address in this meeting. After that, they will be told, about the development works done in Jammu and Kashmir in the last two years. After this, one by one, the leaders of Jammu and Kashmir will keep their point, and in the end, Prime Minister Narendra Modi will maintain his point. Modi will meet Kashmiri leaders, but what will happen? What is the Modi government now preparing to do in Jammu and Kashmir? Who is who in the meeting?

Now, after about two years, the Modi government is calling the same leaders and talking. Before this meeting, Farooq Abdullah said, we will talk about the issues and hope the Prime Minister and the Home Minister will listen to him comfortably. Then take some, such result which will bring peace in the princely state and people can live in happiness. "Not about Pakistan" On the question asked about the demand on Article 370, Farooq Abdullah said, "We will put our demand in front of the Prime Minister. After this meeting, we will talk to the media." On Mehbooba Muftis.

In a statement that 'Pakistan should be talked about', Farooq Abdullah said, "She is a party leader, I cannot say anything in that. Her objective is different, and our plan is different. I will not talk about Pakistan." Granted. I have to talk to my country. I have to speak to the Prime Minister of my country." On the Prime Minister's invitation to the leaders of Jammu and Kashmir for a meeting, Farooq Abdullah said, "Late, come well. Well done.

There is a need to resolve the issue through dialogue. This tension needs to be resolved in some way or the other." is. At the all-party meeting called by PM Modi, CPM leader Yusuf Tarigami said, "We hope that this should be a good start to resolve the issues of the people of Jammu, Kashmir, and Ladakh." However, he also said, "What was done to us is not within the purview of the Constitution. Our rights, given under the Indian constitution, were taken away from us.

We demand the Government of India and the Prime Minister to reconsider and restore those rights will do, which has been guaranteed to us by the Constituent Assembly of India." Tarigami said, "Who prevented the assembly elections from being held here? There is also an issue before our people, that we may have resentment with each other, but we do not want to part ways. The government changed it into a union territory without asking anyone and distributed."

Jammu and Kashmir National Panthers Party President Bhim Singh on Prime Minister's meeting with the leaders of Jammu and Kashmir, J&K National Panthers Party President Bhim Singh said, "I have been invited. Recognized parties have been called. People's rights, justice, unity, brotherhood, from India." We have to speak about strength. It is a question of elections, democracy, human rights."