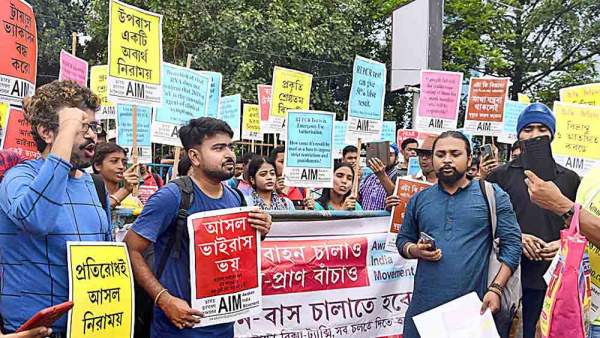 Adding to the Woes!!

The world has been witnessing great outrage and protests in response to the ongoing COVID-19 outbreak. Various strikes have taken place either admonishing governments for not acting quick enough in response to the pandemic. While others have alleged that the measures enacted are too harsh to be followed by the people.

During the lockdown period protests were put on hold nearly everywhere, particularly stay-at-home orders and limitations on mass gatherings. However, as the pandemic has progressed, the increasingly strained relationship between governments and residents in many nations has prompted protesters to go to the streets once more.

While many of the current protests are focused on familiar problems such as corruption, political repression, and economic hardship, a remarkable new trend is emerging: citizens publicly questioning public health measures adopted by governments to slow the spread of the coronavirus.

On Saturday afternoon, there was a barrage of misinformation aimed at deceiving the public.

An anti-corona rally was held in front of the Sealdah Court by an organization of 150 people. They all joined together to persuade people that wearing the mask was a mistake and that social distance rules were unnecessary.

Many misleading statements were made, such as "The fact that the virus has disrupted the world's usual rhythm for more than a year and a half is not truly a panic!" "Investing billions of dollars in drug and antidote research is pointless. So the use of an antidote is unnecessary. The death procession around the world is not caused by the coronavirus for us to stay behind the masks! Rather, people are being harmed by the use of sanitizers and the requirement for social distance. Coronavirus is not at all infectious. "

Needless to say, none of the members of the organization wore masks. When police officers objected to the gathering seeing their nonchalant attitude toward corona precautionary measures then one of the members exclaimed to remain fearless of the virus. He further blatantly spoke about the development of resistance in one’s body by not wearing a mask.

The onlookers commented on the need to incarcerate such people for swaying the innocents. Moreover, labeled them as “the traitors!”

The ruckus creators claim that the government and the media are frightening the public by instilling fear in them about the virus. Corona can't be the reason for someone's death as the mask causes shortness of breath that eventually leads to fatalities.

How dangerous is such propaganda in a situation when awareness of the condition is growing at multiple levels?

When there are people who say, "the virus doesn't exist, that COVID-19 isn't real" , some also believe " it's a smear campaign orchestrated by a variety of people."

A doctor of medicine at Calcutta Medical College Hospital, Arunanshu Talukder, was surprised to hear all this. He said, "It makes me sad to think that there are still people with such a mentality. Even after observing the funeral march on all four sides, it does not appear that they believe in science. It's deplorable that they wish to ignore everyone's sufferings, especially the healthcare workers.”

These types of protests are constantly on the rise, and they and are not only dangerous because participants spread misleading information, but because they risk the possibility of the virus spreading owing to their lack of measures against it. Not to mention the situation is even more critical now, with the Delta variant breakout, than it was last year, when we witnessed comparable protests

Governments should spend more time persuading citizens that public health measures, such as lockdowns, or getting vaccinated are in place for the greater benefit. States must also make sure that livelihoods and public health policy are not perceived as mutually exclusive.

11 months, 1 week ago by Whitney-Edna-Ibe

Thoroughly written and insightful too. The world is getting tired of the Corona Virus. Great job.