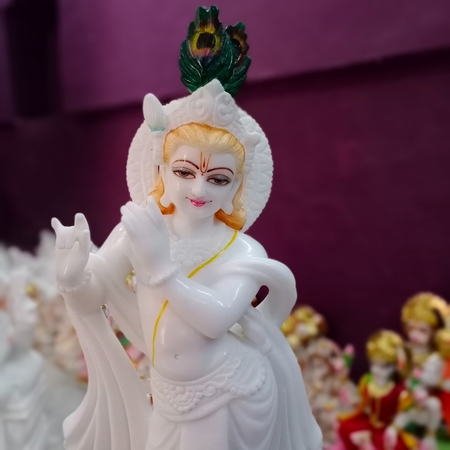 Lord Krishna is believed to be incarnate of Vishnu, the second god in the Hindu triumvirate or Trimurti. Lord Krishna was the eighth son of his mother, Devki, and father Vasudeva.

It is believed that Devki and her husband Vasudeva were prisoned by his brother Kansa( king of Mathura) due to his fear of death. Kansa had killed seven sons of Devki before the birth of Krishna.

After the birth of Krishna at midnight, he was rescued to Gokul (ancient Vraja) due to his safety reason, through the Yamuna river. In Gokul, he was taken care of by Yashoda and Nand Baba. Later Lord Krishna grew up in Gokul, Vrindavan, and finally killed uncle Kansa.

Krishna Janmashtami is observed as an important festival among devotees. On this day devotees vigil and fast until midnight, as it is believed that these were the traditional hours of his birth. So this is celebrated as the birth of Lord Krishna.

Nowadays devotee of Krishna, on this day pay their tribute to him by preparing an elaborated presentation of Mathura where he was born, of Yamuna river, and of Gokul where he spent his childhood.

People participate in activities such as small boys are dressed in Krishna costumes. Whereas small girls are dressed up as Radha. Kids prepare dance performances to present their love for Lord Krishna.

People decorate temples and their houses on this day. They tie small pots of milk and butter to tall poles in the streets and later men and nowadays women also form human pyramids to reach and break the pots. This is believed as a presentation of Krishna's childhood playing with the cowherd boys, which is known as Dahi Handi.

The streets and temples of Mathura and Vrindavan are colorfully decorated for the celebration as it is believed that Lord Krishna was born and spent his growing years there.

As a lord, Krishna was born at midnight, to celebrate his birth, the infant Krishna sculpture is bathed with milk, Chandan and placed in a cradle at that time. After this prasandm of Mishri (sweet balls) and Makhan (butter) which is believed to be the favorite of Krishna, will be distributed by the priest of the temple.

Nowadays, devotees make rangoli it adds beauty to our home. Delicious sweets and food are prepared at home for this special occasion. Everyone in the family participates in the celebration by reciting Krishna Mantras and singing bhajan along.

Although after the birth of Lord Krishna at midnight, the next morning special food and sweets were prepared to celebrate his birthday. In several parts of the country, Krishna Janmashtami is a two-day celebration. The second day of Janmashtami is celebrated as the Nandotsav. On this Nanda Baba distributed the gifts to the community in honor of the birth of Lord Krishna.

In Andhra Pradesh and Telangana, this festival is celebrated as Utlotsavam. At the famous Tirupati Venkateswara Temple, this ancient sport like Dahi Handi is celebrated with great fervor on Navami (on the second day of the Janmashtami).

In the northeastern region especially in Manipur Janmashtami is a well-known festival. On this day People of Manipur perform the Manipuri dance, enacting Raslila- drama representing the love between Krishna and Radha. Janmashtami celebration is not limited to India only, but it is marked in many countries like Indonesia, Bangladesh, Fiji.

The Science behind Sharad Purnima