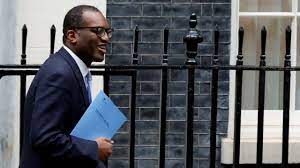 Kwasi Kwarteng, the new Exchequer Chancellor within the United Kingdom's government, was recently appointed to one of the great offices within British politics by new Prime Minister Liz Truss.

This week the Chancellor announced a new budget, shocking everyone, including members of his Conservative party. The budget included the largest tax cuts in modern British politics.

A cut in the basic rate of income tax to 19% from 2023, reversal of national insurance (NI) from November 6, cancelled corporation tax, new rules in universal credit, a form of welfare benefits to be reduced and tightened, and lifting the cap on bankers' bonuses. The chancellor believes that these tax cuts will eventually benefit all, as it will mean more people will take home more of their pay cheques. In terms, the government argues that this will lead to more growth, competition, and, as such, prosperity.

However, research from the Resolution Foundation shows that these tax cuts will disproportionately benefit higher earners over low-income earners and, once again, deepen the North and South divide. High earners of over 1 million pounds a year are expected to save over £55,000 in tax cuts, compared to those earning less than £20,000 who are projected to save only £157 in tax cuts.

Prime Minister Truss admitted to Sky News journalist Beth Rigby that the tax cuts will benefit the rich but defended the policy nonetheless.

It seems Chancellor Kwarteng has embraced a new twisted Robin Hood who steals from the poor to give to the rich. The gamble for the Chancellor is if the government can achieve growth. Many fear that without this growth, there will be a return to the politics of austerity, the decline in public spending, and making the poor poorer.

Labour seats in the North of England that voted for the Conservative party in the 2019 general election are also a concern. Northern voters are often characterised as socially conservative but economically liberal, fearing a return to the North being neglected to the South and decimated public services.

Without these voters, the Conservative party will struggle to maintain its coalition and majority in parliament.

Consistently, the Labour party has been polling higher than the Conservatives, which will further add to the party's woes about public support, and once again develop the image as the nasty party.

The Chancellor has also promised more tax cuts in the coming year as another way to boost growth. Yet, this spontaneous policy of tax cuts remains a gamble that may not pay off. The new Conservative premiership of Liz Truss has officially broken away from Libertarian conservative Boris Johnson, who promised to raise taxes to pay for the National Health Service (NHS) and adult social care. Such tax rises led to revolts by members of his own party and, eventually, to his downfall.