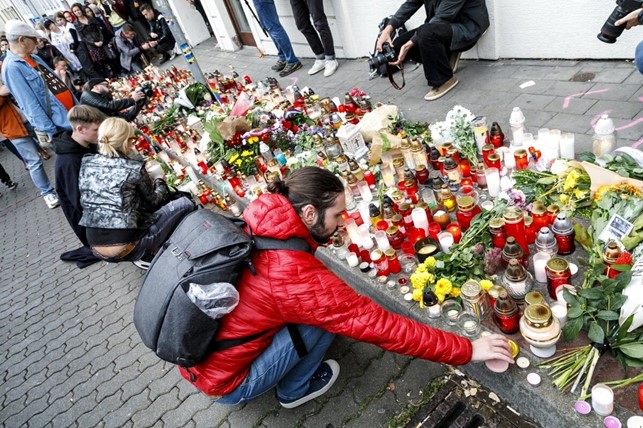 At Tepláreň bar, flowers and candles lie after the killing of two young men. On the evening of October 12, 19-year-old Juraj K. shot two young LGBT+ men outside the bar Tepláreň, near the city center in Bratislava, the Capital of Slovakia.

The man who killed the youths had shared an anti-LGBT+ and anti-Semitic manifesto on Twitter, and claimed responsibility for the hate crime.Juraj Vankulič, a visual merchandiser, and Matúš Horváth, university student and bartender at Tepláreň, were the victims of this crime against the LGBT+ community.

Slovakia’s constitution does not recognize same-sex civil unions, and inequality and discrimination is rife, creating a climate of violence. Indeed, EU internal and external policies aiming to protect gay, bisexual, lesbian, transgender, and intersex people, have increased in recent years to combat this kind of discrimination.

A survey in 2019 showed that: “covering perceptions of discrimination based on sex characteristics as well as sexual orientation and gender identity (…) 53 % of Europeans consider discrimination against gay, lesbian and bisexual people to be widespread in their country, while 48 % say the same about discrimination towards transgender people”.

Zuzana Čaputová, The President of the Slovak Republic, stated on Twitter: “My message in the #EuropeanParliament @europarl_EN today is simple: if we don’t defend democracy, it will cease to exist. Safeguarding it is the task of our generation of European political leaders.”

In the EU LGBTI survey II, in Slovakia, a 20-years-old gay man said: “In Slovakia and especially in my neighbourhood I encounter negative reactions, which generally concern homosexuality. Overall, there is a low awareness of LGBTI people's rights. I am afraid to address people in health care because I am afraid of homophobia, and I also cannot find a suitable psychologist whom I could trust.”

An estimated 15,000-20,000 people marched from Tepláreň to the centre of the Bratislava in solidarity with the LGBT+ community at this time.

Is the Death Penalty Too Cruel for Killers?