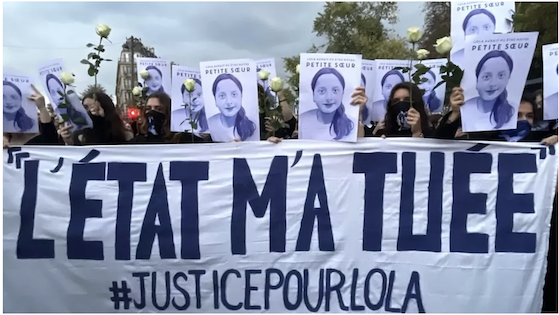 The signs read ‘The state killed me.’ and ‘Lola may be your little sister.’ showing just what the Far Right protesters are trying to convey.

The world seemed to fall silent, as ten days after the murder and investigation of twelve-year-old Lola’s murder was her funeral.

The small, innocent-looking white coffin was carried into the church at Lillers, overshadowed by the recent discovery that not only had she been asphyxiated and chopped up into pieces but also violated and tortured before her remains were dumped back at the courtyard of the foot of the building in the 19th arrondissement of Paris.

It could be anyone her age that you know, not just a sibling, but any child could be next.

Nationalists have a startling point about the safety of young students, just like any violent murder or disappearance had in the past or the most recent, From Madalaine McCann to Lola.

Her killer, a young Algerian woman who is not native to France, and was found to have ignored the expiry of her visa for two years, has sparked hatred towards refugees finding life in France, despite the community of those that are already there.

Lola’s family have begged online and in public- “Immediately stop using the name and image of their child for political ends.” They even asked some of the protesters themselves, to no avail.

Even French Television, TF1, did a survey revealing that almost sixty per cent of people thought those living in France without permission should be put in administrative detention, even though the political uproar of immigration is not new and certainly not something easily solved, not even globally.

According to numbers, the BBC has been told; the Interior Minister (of France) in 2021 estimated that between 600,000 and 700,000 people are living in France illegally. And a Senate report found that more than 90% of expulsion orders are never complied with.

In the National Assembly last week,  Ms Marine Le Pen, a runner-up from the Presidency against Emmanuel Macron,  demanded, “What are you waiting for, to finally stop this out-of-control illegal immigration?”

“The fact that the alleged perpetrator is a woman from Algeria, the crime is horrendous, the victim is a young girl, and the perpetrator is maybe insane. Many people think, 'Why are we prepared to have such people on French soil?” said Jean-Yves Camus, the political scientist, who said the case presented a very potent cocktail for the far-right to use”.

“The fact that the alleged perpetrator is a woman from Algeria, the crime is horrendous, the victim is a young girl, and the perpetrator is maybe insane. Many people think, 'Why are we prepared to have such people on French soil?” He continued, “There would be less of a reaction if she were from Morocco or Tunisia -And these two countries are also more willing to accept their nationals when they're deported. The problem we have with Algeria is when one of their nationals is deported; they just tell the French police: 'We don't want him'. So what do you do?

“Let the police and judiciary do their job….” (She wants the protesters and other politicians to respect privacy laws in France and respect the family and the memories of their daughter.)

Marine Le Pen has been presenting herself as a measured and moderate anti-immigrant politician since she ran against Macron.  She banned her party from joining a memorial organised by supporters of her hard-right rival Eric Zemmour, -Who ran himself for the Presidential role and has been accused of using the national tragedy in favour of his nationalist political beliefs, coining a new crime of ‘Francocide’ to describe Lola’s death, based on his opinion that she was targeted because she was French.

Ms Le Pen opted for a minute's silence outside the parliament building to avoid any scandalous press for political reasons, as it looks like this could be adverse to the current president of France.

Macron and his wife have described the developments following the killing as “extreme evil (and said it) “-was dizzying to face what some in society were capable of.”

Since the funeral, He and his wife are still shocked, along with the rest of the country, about how “It was an absolutely abominable and intolerable tragedy”.