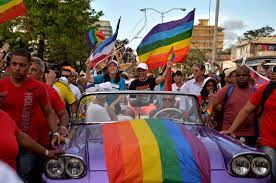 For the first time in Cuba's history, same-sex marriage is now ratified. The act named the 'Family Code' was passed by a resounding majority of Cubans in a national vote on September 25.

It is a body of laws that provides the LGBTQ+ population with a variety of rights. The new law also allows for surrogate pregnancies and encourages the workload at home to be evenly shared.

The newly elected president of Cuba, Miguel Díaz-Canel, who has publicly endorsed gay marriage, has firmly backed this proposal. Passing the law, Diaz-Canel said it was a way to "pay a debt to various generations of Cubans whose domestic plans had been waiting years for this law."

Around 74.1% of Cubans that were eligible to vote turned out, with the majority of the electorate voting for the family code. The new family code extends protections for women, children, and the elderly and allows LGBTQ+ couples to marry and adopt children.

For years, starting with the 1959 Cuban revolution led by Fidel Castro, homosexuals in Cuba were persecuted. LGBTQ+ people were forced into government work camps and openly faced discrimination. Gay men and women were also sent to 're-education' camps. Although homosexuality was legalised in 1979, many LGBTQ+ people experienced direct and indirect discrimination.

Although Fidel's regime for LGBTQ+ citizens was oppressive, there are still supporters of the measure out there. One of the major ones is Mariela Castro, director of the National Center for Sex Education. Mariela Castro is the daughter of former President Raul Castro, brother of Fidel. Mariela has also been a promoter of rights for same-sex couples.

However, not all Cubans rejoice at this result. Cuba's evangelical community has consistently fought against growing LGBTQ+ rights and openly advocated against the family code. For years, many political parties have resisted legalising gay marriage due to fears that it would lower voter turnout.

In 2018, there was a possibility for a new constitution to be rewritten that would allow gay marriage. However, the opposition was strong enough to make the government back away.

About 67% of voters, nearly 4 million, voted in favour, according to the Cuban government and around 33%, or 2 million people, opposed the measure. The law required 50% of voters' approval to be adopted and, as such, was made law.

Yet, many Cubans believe this law remains an act of political expediency. Diaz-Canel's popularity was falling in the polls, and they simply ratified this legislation as a way to appear progressive. Cuba currently suffers from a dire economic situation. Diaz-Canel's government has forcefully suppressed dissenting voices and protests in recent months.

The official attitude towards homosexuality has changed in Cuba thanks to the efforts of politicians and activists. Sixty-four-year-old resident Miguel Alberto Galindo said he had voted in favour of the codes. "It's time that homosexuals have the same rights as everyone else," he declared.

The Rainbow Hotel, described as Cuba's first LGBTQ+ hotel, reopened in December, marking a step forward for LGBTQ+ Cubans. These results show how much Cuba has changed, and many would argue for the better.