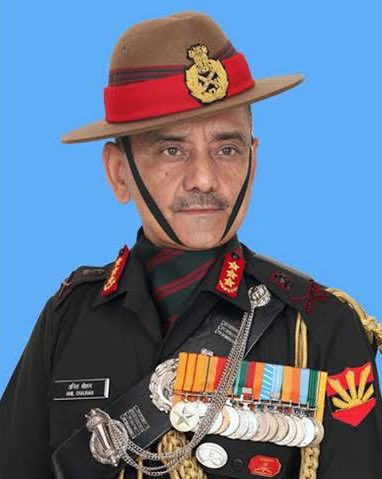 On Wednesday, the Government of India announced that Lt General Anil Chauhan (Retired) is the next Chief of Defence Staff (CDS). This post has remained vacant for more than nine months after the demise of General Bipin Rawat in an unfortunate helicopter crash. The post of CDS was created to facilitate cooperation among the three services- the Army, the Navy, and the Air Force. General Bipin Rawat was appointed as India’s first CDS in January 2020.

A retired officer has been appointed as the CDS for the first time. In a press release, the Ministry of Defence stated,

“The Government has decided to appoint Lt General Anil Chauhan (Retired) PVSM, UYSM, AVSM, SM VSM as the next Chief of Defence Staff (CDS) who shall also function as Secretary to Government of India, Department of Military Affairs.”

Lt General Anil Chauhan had superannuated as the GOC-in-C of Eastern Command in May 2021. He has vast experience in counter-insurgency operations in Jammu and Kashmir and North-East states, which might have become a significant factor in his selection as the CDS. He has also held the crucial position of Director General of Military Operations (DGMO). Additionally, he was commissioned into 11 Gorkha Rifles in 1981. He is an alumnus of the National Defence Academy (NDA), Khadakwasla, and Indian Military Academy (Dehradun). Moreover,  he was decorated with the Param Vishisht Seva Medal (PVSM), Uttam Yudh Seva Medal (UYSM), Ati Vishisht Seva Medal (AVSM), and Vishisht Seva Medal (VSM) for his exceptional service in the Indian Army.

The need for having a CDS was felt for the first time after the Kargil war in 1999. The main aim behind creating this post was to enhance the coordination between the three Armed Forces. Another significant duty of the CDS is to foster better cooperation between the bureaucracy of the Ministry of Defence (MoD) and the Armed Forces. Earlier, the decision-making process between MoD and Armed Forces was slow, but after the appointment of CDS as Principal Military Adviser (PMA) to the Minister of Defence, the decision-making process has accelerated. General Bipin Rawat, the first CDS, has also played an essential role in making the blueprint for the creation of joint theatre commands. The new CDS will be expected to carry on the work of its predecessor.