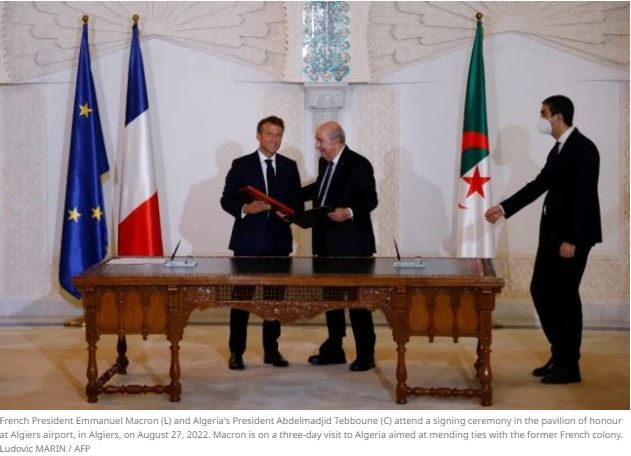 In the last few days, the French president Emmanuel Macron decided to visit Algeria for the first time since the Algerian ambassador in France was withdrawn in October 2021 after statements and accusations made by the French presidency about the politico-military system of Algeria. The bilateral relations have generally witnessed many crises and tensions over the years since Algeria’s independence in 1962. This time the visit comes in a context where France is in a desperate situation and in the midst of an economic and political crisis. Meaning that in the current context of the Ukrainian War and the imposition of economic sanctions, European countries suffer greatly from the cuts in the exports of the Russian’s gas.

Therefore, France now seeks to re-establish its relations with Algeria, who is considered to be responsible for 20% of Africa’s natural gas exportation when France is now in a dire need to search for other economic allies to provide it with the basic needs. It is a strategy followed by European countries, who are trying each to find alternate gas suppliers from Russia. It is worth noting that Algeria is North African country that used to be colonized by France for 132 years, but tensions have and diplomatic ruptures have occurred between the two countries on a regular basis. However, France now sees it best to rebuild and improve partnership and cooperation with Algeria and this through the study and unrestrained access to the historical archives related to Algerian War of Independence (1954-1962).

There is an attempt, especially from the French side, to overcome the colonial past and the atrocities and crimes that were committed back then by the colonizers and that the Algerian population is not ready to forget especially in the context of celebrating the 60th anniversary of independence. From another side, France’s attempts to rebuild and promote relations with Algeria is not simply reduced to economic motives, but also political ones meaning that since the French presence has decreased in the continent by the retreat of the military forces in Mali, it still wants to protect its interests in the area specifically in Sahel and this could be done through Franco-Algerian cooperation. In general, Macron’s visit was intended to be for three days, but it was extended on Saturday. The French President met with the Algerian on Abdel Majjid Tebboune and had many stops and visits during his stay, like the Grand Mosque of Algiers and the city of Oran. Finally, Macron vowed to make a new pact or a new page, something which was not taken well either by the French or Algerians either.